There is now a Japanese " Just Giving"! Launched on March 9th they started with about 100 "challengers" who have put up pages and have already signed up a range of celebrities; a baseball player, Olympic runner who are supporting a range of charities from a project for NEETS , children in Africa and cats and dogs. Set up by Daigo Sato (pictured below) who spoke at our last ACEVO annual dinner. 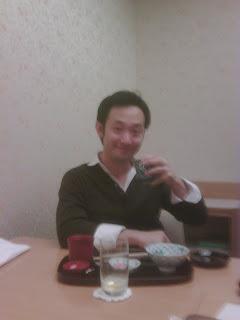 It will need to work hard to convert the general population! Only 2.2% of Japanese give to charity- an astonishingly low figure compared with the majority of the UK. I was quizzed over lunch about gift aid which Daigo aims to get introduced into Japan. He was asking if I had any tips about persuading Prime Ministers! He marvelled at the generosity of our scheme. I said we had been complaining it was not good enough!

The lunch was a traditional kaiseki-ryori, a particular treat. It's Japanes haute cuisine: just fine morsels of the best seasonal fish and vegetables served on the most exquisite trays and bowls. It tasted glorious though I have to admit some of the dishes looked very odd. The brown squidgy thing with tentacles did not look edible. But was.

And then I partoke of the annual cherry blossom viewing ritual. I took myself off to the main Tokyo park where, with what seemd like half of Tokyo I wandered through he cherry blossom , stepping past the families picnicing on the blue plastic sheets and avoiding with difficulty the legions of photographers wielding some pretty hefty camera hardware. But you can see here its all rather splendid. 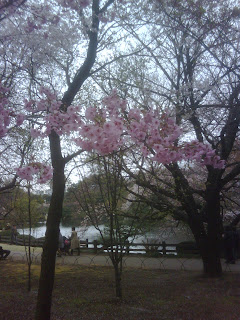 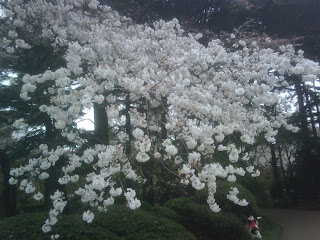 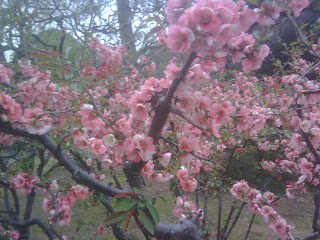 And its the time to get married. So here a beautifully attired couple before their sahinto ceremony at the Meijii shrine. 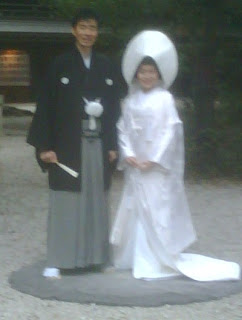 But Japan has its barbarous side. I saw a report that some 100,000 dogs are put down each year as they are discarded by owners. And there is no market for rescue dogs because they don't do second hand ( its also why there is no charity shop sector here either ). And in a number of places they actually get rid of the lovely but unloved animals by gassing them. A disgrace. On behalf of my own dear hound; currently holidaying at my sister Sara's I protest.

The evening weas rounded off at a magnificent Japanese traditional restaurant where another top meal awaited. I was dining with the Ambassador and catching up on old acquaintances, as you do , even after 35 years! And now its off for a few days break over Easter. Even a CEO deserves rest and relaxation! And the blackberry too!