But not before meeting an inspiring individual; John Bridgeland. He runs Civic Enterprises, having previously been the President's Director of the Domestic Policy Council in the White House.

Liam Byrne MP had recommended me to see him; and I can understand why. He was one of the architects of the Serve America Act, which was pioneered by the late Senator Edward Kennedy.

But as I discovered he and I have an interest in genealogy. He has traced his family back to no less than three passengers on the Mayflower! And we swapped stories about our respective backgrounds; he has Robert the Bruce, I have Edward 111.

He has a major role to play in the role out of volunteering in the States. He stressed the importance of a professional approach which guarantees the effective management and training of volunteers. Part of the recent spending programmes to support "Serve America" has been a Fund to invest in organisations to do just that. A fresh and welcome approach. I wonder if the various Parties who have promised similar schemes to the US model will also establish a Fund to ensure the management of volunteers?

He was also interested in the potential for loans as opposed to grants. He was keen for me to send more info from the Social Investment Business on how we do loans. He thinks there is much more scope for this approach in their own work.

We agreed we would consider how to promote more shared learning on the social finance market and social innovation. There is considerable experience in the States; lots of research and data and yet we have not utilised this here. Similarly John was fascinated by the advances we had made on loan finance in the Social Investment Business and was interested in whether to make more loans available in their system.

This all points to us sharing this experience and discussing lessons and learning. So we agreed we would do this.

Just before leaving I went to the Mass at St John's Episcopal Church, more familiarly known as the President's Church, as it is next to the White House and indeed Obama attends. The Preacher was the Presiding Bishop of the Episcopalians in the States, Katharine Schori. As I said to her afterwards I have never actually met a Woman Bishop before! Will it catch on in England I wonder. Here she is: 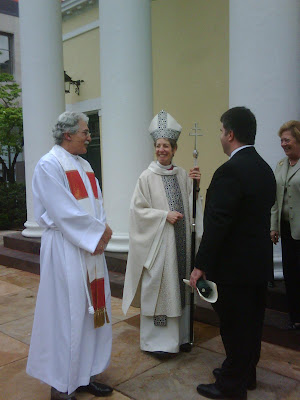 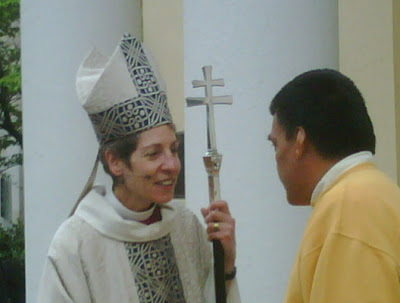 But back to an increasingly interesting Election Campaign. Quite how a Hung Parliament will affect the fortunes of the sector is not clear. Good job that at least in ACEVO we did not ignore the Lib Dems!