Kindling fires in the Bodleian?


It’s like being a student again! I turned up at the Bodleian Library in Oxford on Monday brandishing a somewhat moth eaten Library card, “well, we've not seen one of those for some time", was the amused response. “I’m afraid we have gone digital now". Well, my card was dated 1972 and not used since well back. Still, they issued me with a new plastic thing and I didn't need to take my oath again (which I did in 1972) promising not to “bring into the Library or kindle therein any fire or flame".

The Bodleian was founded in 1602 and is housed in the most magnificent buildings. I'm sitting in the Old Bodleian looking out over to the Radcliffe Camera, built by Wren and one of the Library reading rooms. I wanted to get a seat in there but it was jam packed with proper students hastily trying to cram 3 years work into a few weeks before they submit to their examiners.

Still, I had a splendid view of same from my seat- as you can see 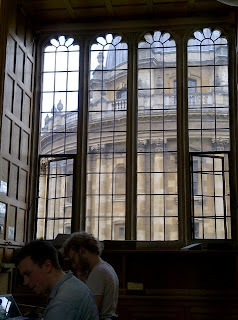 I'm having a reading week in Oxford as part of my Great Project; the history of charity. I went through the Bod's catalogue- over 900 entries come up under “history of charity" but most are histories of individual charities or esoteric sermons and discourses. There isn't really anything that purports to provide a broad sweep of our history since the first still extant charity was established in 598 AD (Kings School, Canterbury). It’s clearly an under researched subject; crying out for a Chair of Charity Studies methinks. That's a broad hint btw. Some philanthropist (or Apple/ Starbucks now they don't bother paying much tax) ought to fund it. I could be available; I have my own gown.


What is particularly fascinating is the change that occurred over the Tudor period, following the Reformation, from essentially a religious base for charity actions to a secular form of charity and charity trusts. And as the centuries developed, the rise of the campaigning voluntary organisation emerges; particularly in opposition to slavery at the end of the 18th century and then the great charity movements of the early 19th century against child and animal abuse and prison reform for example.

So we see the move from purely service provision as effectively the arm of the State's welfare provisions to new forms of campaigning and advocacy charity and to third sector bodies that both deliver services and campaign for change. One thing is clear; there is precious little material on this aspect of the work of charities so I need more help.

But I don't want you to think I'm totally immured inside the ancient Oxford walls. I emerge to opine on the Work Programme, health and the like.
Stephen Bubb

I'm glad you seemed to have a good time at the Bodleian Library and am impressed that you had retained the old 1972 reader's card!

As the History Librarian at the Bodleian I was intrigued by your finding that there is global historical overview of history of charity. It it true that publications overwhelmingly focus on very specific locations, periods or charities. I went through SOLO and come across the following reference which you probably already know about but which I send in case it helps:

I've not looked at them myself but they *may" just be generic enough.

Don't hesite to get in touch (isabel.holowaty@bodleian.ox.ac.uk) if you would like to follow up any of these.

NB I think you've got the RadCam and Old Library photo labels the wrong way round...