The cousin in the car park

Assiduous readers of the Blog will recall my mother is Anglo- Irish, born in the rather gorgeous fishing village of Union Hall in Co Cork. Her great grandfather x4 was one Thomas Somerville, born in 1689 and Vicar of those parts. He made a rather splendid marriage to a rich lass, Anne Neville. My rather blurred photo shows her portrait hanging at Drishane in Co Cork; 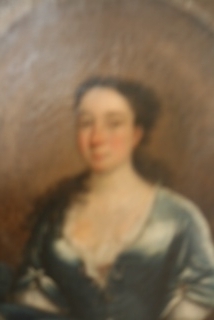 Now Anne was from a fine family and a direct descendant of Joan Neville, one of the daughters of John of Gaunt. Joan's sister Cecily made an advantageous marriage to the Duke of York and in 1452 produced a son they called Richard.

Richard's rather battered corpse has recently been discovered under a car park in Leicester and, as we now know, identified as King Richard III.

So hence I am a something like 16th cousin once removed or a second cousin 16 times removed. Or whatever, as I can't count. Rather tenuous I know but I am expecting an invite to the funeral! And those rival umbrella sector CEOs should take note. Cross me at your peril. Remember what happened to the Princes in the Tower. Let's just hope Stuart is not related to Henry Tudor!

And from car parks to cricket grounds. I was at dinner in the Oval last night! The annual dinner of our sister organisation SOLACE (the Society of Local Authority CEOs.) Amusingly I found myself on a table with Tony Hunter. He is the next President of SOLACE and CEO of NE Lincolnshire Council. He greeted me warmly as he had worked out I was the same Stephen Bubb he had known many years back in Oxford. His best mate from school (Doncaster Grammar) was on my staircase at Christ Church. We were both appalled when we realised this was over 40 years ago. He said my laugh was instantly recognisable!

Tony is also a trustee of SCOPE. Richard Hawkes, their ebullient CEO (and ACEVO member naturally) was at the table: busy planning for the future. He has been a strong voice for disability rights and social change and forthright in his denunciations of the disgraceful operation of the new disability work assessments that have proved so disastrous. Indeed the Commons Select Committee have today condemned them. How pathetic that DWP, instead of looking at s system that has a 40% success rate for claimants at appeal, dismiss the report and attack the MPs. Perhaps those in DWP responsible for this might remember that some people with cancer, wrongly denied benefit, died before their appeal was heard and show contrition.

The dinner was rich pickings for networking and remembrances of times past (my days in local government). I didn't spot the CEO of Leicester City Council however...