Well, here I am in the Hall waiting to hear from Boris! 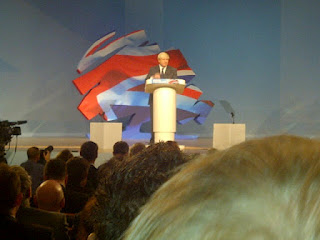 It was another early start. A fringe meeting with the Foundation Trust Network and the NHS confederation independent sector's David Workset talking about putting patients first. My role was to promote our sector and what we do by putting patients and citizens in charge of their care. And after Boris I'm at another health fringe on what we can do with the doctors.

Doctors should now be central to the commissioning of health care. Charities need to be beating a path to the CCG door. Making our pitch. Selling our wares, so to speak. Showing how we can deliver integrated care and support. How we can be a link between councils and CCGs on behalf of citizens.

And to cap off the day I'm at our Acevo fringe event on open public services.

Birmingham is a strange city. A living testament to the evils of the City fathers and town planners who, in the sixties did more to destroy a vibrant Victorian metropolis than the Luftwaffe. Difficult to walk far without being confronted by concrete monstrosities. By ring roads. By unpleasant tower blocks.

I played hooky yesterday and went to visit the Pugin RC Cathedral of St Chads to pay respects at the Blessed John Newman shrine. I had to navigate the 6 lane highway to reach it and in the cathedral is a stained glass window which has a depiction of the Pugin Bishop's house torn down by the 60s goths of Birmingham city in their drive to modernise and rip out all that victorian stuff that stood in the way of the progress of The Motor Car.

What a lesson for the likes of Nick Boles, our planning Minister who will join me tonight at out Fringe. What a shame there was not a more dynamic civil society in birmingham at the time to oppose the planners and save the great Birmingham Victorian heritage.

Both Birmingham cathedrals are rather fine. The Anglican has superb Burne Jones stained glass. One window the last he did - and he lived just down the road I was told.

The RCs have St Chad, Pugin and Newman. Here is newman's shrine. 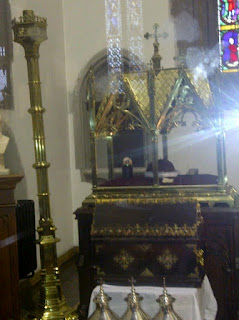 Last night was a round of networking which started merrily with the Irish Ambassador's reception. I was busy complaining to a member about the trialks of all these conferences until he said, "oh come off it Stephen, you love it" and it is true that the chance to meet with lots of my members , to engage in debate, to beard Ministers,to promote what the sector does and our ambitions, and yes to also have fun is a great one. But it will be nice to see my own bed and The Hound tomorrow!

MD247 doctors and telemedicine program members are legitimately given the opportunity to connect, allowing a patient the chance to talk to a doctor without that doctor worrying about time and overhead.
http://www.md247.com/md247-blog/category/3-talk-to-a-doctor-.html