Health and fun in Newcastle!

I'm now on the train heading back from 2 days in Newcastle; visiting organisations that the Social Investment Business have made loans to and talking to ACEVO members( and seeing SIB staff in our Newcastle office.)

Newcastle is a great City. The georgian sweep of Grey St and Elgin Sq is one of the most magnificent street vistas in England. And the Tyne , which looked fantastic from the window off my hotel has those lovely bridges. As I'm old I remember that song by, who was it now? " Bridge on the tyne is all mine, all mine". 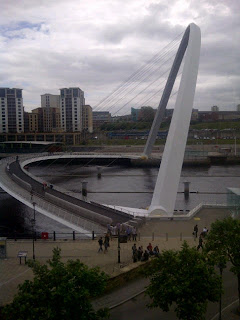 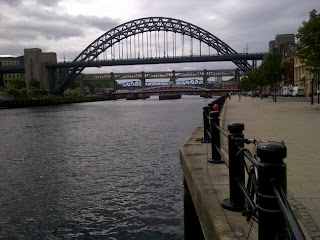 Indeed the hotel, the Malmaison is in a building that was the first to be built of prestressed concrete. And it was the HQ of the Co-op before they moved to Manchester( so good I used my co-op visa paying my bill! ).

I had a good session with the staff of SIB. We do our main investment analysis here so a great lively bunch who do a key job in judging the viability of loan applications. It was good to do this just 2 days before the interviews for the new CEO of SIB!

Then it was off to Benwell to see "Health Works", a healthy living centre which has had a loan to refurbish facilities like the gym. Sarah Cowling , the CEO is also an ACEVO member and is a strong and determined Leader.

This is a centre that really reinforces my view about how we need to move he health service away from acute hospital pre dominance to treatment and care in community based facilities and activities.

A great example is the community health trainers they employ. One was sitting in reception and offering people blood pressure checks. Obviously I took advantage! 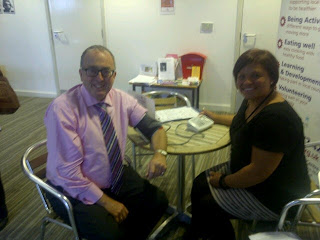 She told me they had one person in who had a test and revealed she had been having these tests at her GP but he had neither told her what he was doing with the machine he mysteriously produced , nor what the result was when he did it!

They run great programmes of exercise , both in the gym and outside ( they also work with the BTCV green gym ), advice on diet, classes for recovering stroke patients and many other activities .

Then back to the hotel for a lively meeting over drinks with some of my ACEVO members in the NE. It was heartening to meet with such a dedicated and forward thinking bunch; both strongly committed to their beneficiaries and to professionalism in our sector. They were warning me the cuts are doing much damage and that the worst is to come. One of them told me they had just had one contract cancelled completly by South Tyneside council ( having been promised they wouldn't ) and the other 2 arbitrarily cut by 15%. And bizarrely, this was done by BT ! Yes , that's BT the telephone people who won the contract to run many of the back office and other services for the Council.

And there was time for gossip too and some friendly chat on the state of our sector and its many players! It was a privilege to meet them and to have my prejudices confirmed that we have many brilliant leaders in our sector.

Then onto a " health "dinner; I was meeting with the Chair, Vice Vhair and the third sector members of one of the Newcastle GP consortia,( must try to remember they are now Clinical Consortia Groups; ugh ), they have called themselves the bridges group.

They have developed an innovative governance structure , with a clinical governing group ( which is just the doctors in the group) and a governing board with an independent chair , the brilliant Chris Drinkwater( a retired GP who is a backbone of the Newcastle third sector and civic scene ).

Chris has produced a remarkably good guide to how to commission non traditional providers for health services. Called " thanks for the Petunias" it is a good guide to how the NHS should be using their sector to help support the self management of long term conditions; a subject dear to my heart and on which I wrote in my Report on Choice and Competition for the recent listening exercise.

Worth a read. Get it from here.

And whilst on the subject I ordered a bread and butter pudding at dinner but when it arrived I decided that is not what I'm supposed to eat so given the other guests I put it to one side!

The morning was a visit to the Walls End People's Centre. The feisty CEO Maureen showed me what they are doing with the £1.4 m loan they have received from SIB as part of the Community Builders Programme. They are using this to join together and refurbish the adjacent Memorial Hall , given to the people of Wallsend by Swan Hunter. There is a rather splendid dance floor. See me and Maureen here! 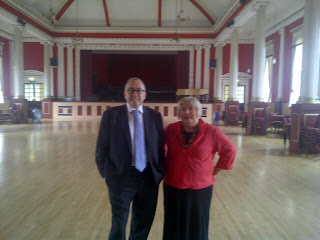 They also run the cafe at the actual walls end , ie the end of Hadrians Wall. It was rather cool to go and see the site of the Fort on the end of this great Roman achievement. 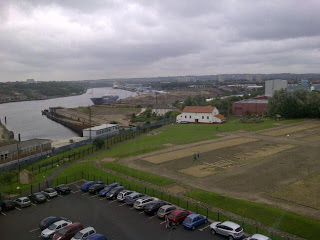 A metro ride back to lunch with Rob Williamson, the CEO of the Tyne and Wear Community Foundation ( the largest of them ) and Jo Curry , CEO of VONNE. We had lunch, robust discussion , good exchange of views and laughter.

Jo gave me some chilling stats. 49% of charity income in the NE is from statutory sources , as compared with 38% nationally. So they are particularly vulnerable to cuts from councils etc. 73% report a cut in funding, yet 59% report increased demand. 40% have cut staff. A further 53% expect to make more staff redundant.

When there is so much need for what our sector has to offer. What we can do. And how better we are at running public services, this is a crime!

On the way I passed the Norwegian Consulate. I stopped by so that I could pay my respects- they were to have a Book of Condolence but it is not arriving till Friday. Hard not to be affected by the tragic events of that fateful weekend when we are now seeing the faces of all those young people murdered by one evil man.

I am Mrs.Irene Query i was in need of a loan of $150,000 and was scammed by those fraudulent lenders and a friend introduce me to Dr Purva Pius,and he lend me the loan without any stress,you can contact him at (urgentloan22@gmail.com) Approvals within 2-4 Hours


Do you Need Instant Loan from $2000 to £15,000,000.00 with no collateral
required and receive a no obligation loan approval.We welcome the
opportunity to show you how effective we are at helping our clients
obtain the money they need to succeed. Our professional staff is
available for a Free Consultation.At America One Funding, we
understand that unexpected events arise requiring extra money that may
not be readily available to E-mail: arabloanfirmserves@gmail.com

I am keen of learning Flash, is there any piece of writing related to Flash, if okay, then please post it, thanks.
Healing

Hello everyone on this site seeing this post, I'm here to talk about how I got my loan without too much stress. I got a loan of $50,000 from Global Loan Access at the rate of 2%, if you have been seeking to get a loan and you finding it difficult Global Loan Access is your solution. Contact them today to get your loan at (globalloanaccess@gmail.com)