St Nicholas' Parish Church in Chadlington is a delightful 13th century clerestoried Cotswolds church set above the Evenlode valley, surrounded by beautiful countryside and looking across to the ancient Wychwood Forest. I was there on Friday evening at a fundraising event to support the local CoE Primary school.

Our MP was being interviewed by Jane Moore , a local resident and , regrettably, a journalist with The Sun newspaper. I'm surprised she didn't sizzle walking past the Holy Water stoup.

A terribly pleasant English occasion, introduced by local worthy Lord Chadlington. Polite questions on matters of moment such as youth unemployment and the plight of the world's poor. I couldn't help thinking of the difference in the constituencies of out current and our potential PMs. DC's response on youth unemployment was to talk of the young lad with a 2.1 from a good university who could not get a job. I suspect GB would have talked of the despair of the lad on an estate blighted with joblessness and where generations have been out of work.

But perhaps the more interesting bits were whether David Cameron knew the setting for coloured clothing on the washing machine. He did. And how he proposed to Samantha (un romantically on the sofa watching a video). His favourite PM - Robert Peel - because he put his convictions above party interest. And how he was a direct descendant of William 1V by the bastard line (unimpressive to someone descended from Edward III by the bastard line ). I had a quick word before hand on his recent Lecture - I said the book was in the post - before the Vicar claimed him.

There are many delights of living in the Cotswolds but not the lack of public transport. So I walked back the five miles along the unlight road in the driving rain until a passing local gave me a lift for the last mile. I have never learnt to drive - a virtue in these climate challenging days but somewhat of an inconvenience in the countryside. 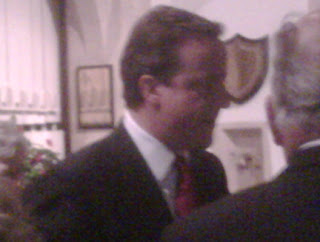 Saturday morning and its the annual Church Bazaar. I always help out at this glittering event, and pick up some useful Christmas presents, though the plant stall was a severe disappointment this year, even despite the Duke of Malborough's cyclamen.

Saturday evening is often the highlight of the week. A relaxing moment, unwinding from the rigours of a Lecture filled week with good food; usually a locally produced roast, bottle of fine Claret and starting with a bottle of Champagne. I was through the Champagne and onto the Claret when I had this nasty feeling. Was I not due to do the George Galloway phone in at 10.15? Yes, horror, it was, as a text from my superb and on the ball Head of Comms that reminded me. Too late. Lots of coffee and a bracing walk in the rain and wind (Hound not impressed) but a good interview. George very kind and I got a good opportunity to spell out the case for the sector. Inevitably the wretched Divide campaign against the sector came up, but I defended the salaries of their General Secretaries (£308k ) and lamented their attack on their fellow third sector colleagues. I think the words " gross hypocrisy" may have slipped past my lips! I loved his description of me as the "capo di capi " of the third sector. Its rather apt I suspect. Hubert wpuld approve! Apparently 2.5m people listen to this programme. But it would be a sad reflection on the life of a charity CEO if they were listening to George Galloway at 10.15 pm on a Saturday night!

And let's not forget the Bubb birthday celebrations. Picture shows us all enjoying lunch at the Fishes pub in North Hinskey. 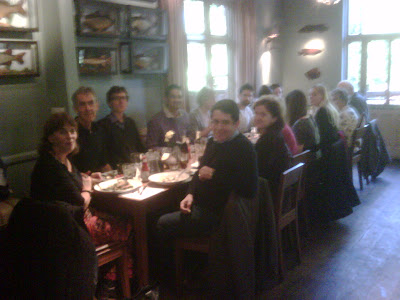 My nephew Alexander has his birthday just two days before mine. Couldn't he have waited? He is currently at Exeter (College not City naturally) reading for his Doctorate. And my nephew and niece, the twins Miranda and Oliver, are preparing to sit their Oxbridge exams so go to look round prospective colleges - Brasenose and Worcester are favoured - whilst here!

I congratulate myself on managing to be up for the 8am 1662 HC at the Parish Church then its back to Brixton. Ready for another heavy week fighting for the cause.

And in case you think I'm becoming too improbably grand I had my Sunday roast lunch at the Effra Day Centre, a Lambeth Council Centre to support people with mental health problems.

Then as it was a glorious Autumn day I took Hound for a run in Brockwell Park. As you see Brixton is not without its beautiful spots! 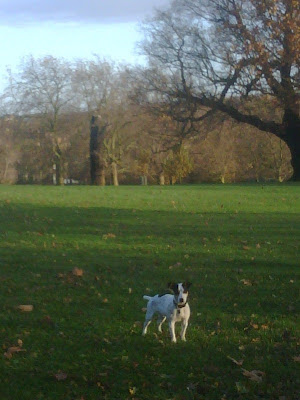