Well , it was all quite an event. The dinner went off incredibly well; so many guests I missed some off in my welcoming speech and had to be reminded by my excellent Deputy of the people I missed. Eight MPs, two Permanent Secretaries, three Baronesses (all dinner parties should have at least one) two Ministers, the Head of No: 10 Policy Unit (Nick Pierce, who used to be an ACEVO member. So plenty of meat for my members to get stuck into.
We had speeches from our fraternal guests from JACEVO - and they looked marvellous in their full formal Kimonos! Michael Leahy, the General Secretary of the Union Community (who is an ACEVO member ) , the 2009 winner of the charity award ACEVO member Jennifer Rogers, who runs Leap Confronting Conflict.
Angela Smith MP, gave our main speech. It was a pleasure to welcome her and it was an excellent speech, just the right mix of humour, a gentle piss take of me!! And serious points on the role of the sector. My chair rounded things of with our wish list for Angela on what we want her to deliver:
*gift aid reform
*a Social Investment Bank
*the third sector as the " preferred " supplier to the NHS.
Easy ones really.
And we managed some discreet briefing on Gift Aid during the meal with one of our influential guests who is speaking to the Chancellor on this and will be taking the ACEVO demands to him.
It was particularly nice at the end to have a quiet drink with Angela to celebrate my birthday. If you were to suggest we were drinking champagne to mark this auspicious occasion I could not possibly comment. Angela is both a committed sector person and an excellent Minister. An advocate at the heart of Government. And as I said if my constituency MP is David Cameron , Angela is my Parents MP!
As CEOs we like music and song and we had both. The photo shows " The Choir without a Name", a group of homeless people who sing! As I said , we like third sector singing! 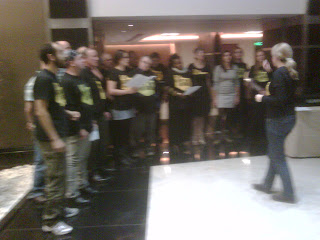 I'm afraid I returned home rather late, indeed in the early hours and I was the first speaker opening our conference at 9.15am. An action packed morning session with more top speakers than you could shake a stick at!

Patrick Diamond, from No: 10 Policy gave a fascinating overview on policy. He ended with an interesting point that the next decade will see a move away from emphasis on the individual and their rights and needs to more attention to community and fellowship, on family and faith. This is slap bang in the middle of the third sector's territory. And it was an interesting lead into the speech from Rt Hon Francis Maude MP. We have had Francis at a number of events know and I like his discursive style. He always has some very interesting things to say. I was struck by the point that he intends to build on the past decade achievements and not sweep them away. The Tories will keep the Office of the Third Sector. Indeed he was indicating they have rather given up on the search for a different name! That will disappoint my friends in NCVO who have gone hell for leather on "civil society"!
Francis was followed by Tessa Jowell. A clearly well crafted speech and one I know she gave a lot of attention to. We will have it up on the ACEVO website. An extremely good resume of the achievements and progress of the sector over the last decade. She challenged the sector to think of its own role, in professionalism and growing strong but remaining true to an independence and reflecting on needs to reform.
Charities must be transparent and flexible to keep public onside she said. Organisations will have to become more transparent and adaptable in order to maintain public support, public confidence in the nature and role of the sector had been significantly challenged since the banking crisis began. She quoted from the ACEVO and YouGov poll we conducted over the summer showing public awareness of charity lags significantly behind today's reality.
The morning ended with a fascinating double act from the CEO and Vice Chair of an American non-profit, The Center for Leadership Innovation. They spoke of their major funding challenge when they had grown enormously on the back of big Government contracts but realised that the payments were simply not covering full costs. They withdrew from all the contracts and returns to a major drive to get foundation and commercial support. A hairy time but ultimately successful. It was a timely warning of the need for us to continue to ensure we get FCR in contracts. This will be a challenge as cuts come and public sector bodies try to trim back on contracts and expect us to subsidise them from charitable income. That must not happen.

The morning session was superbly chaired by my talented Director of Strategy, Seb Elsworth, who had also chaired all the morning speakers. The afternoon (and yes Robin the lunch was fabulous) had a very revealing session on social investment and the potential for bonds and a social stock exchange. Sir Ronnie Cohen was magisterial, and the debate good. Toby Blume, member and CEO of the Urban forum made a hugely effective speech on the need for more responsible financial systems and the potential for a community reinvestment Act in this country acevo and a range of community and social enterprise and sector financial bodies are joining together to mount a national campaign to promote responsible finance. ACEVO is providing the Secretariat for this. This will be a sector wide campaign , drawing national and local , community and large TSOs together around a common theme of a more responsible banking and financial sector. This is a matter of massive importance to us and our beneficiaries and to the community at large.

I had begun my speech with the quotation from Genesis. My ACEVO North Director, Jenny Berry also ended with Genesis. The group!

A great concluding thought for us CEOs!

Then off to Party! My brother Nick did a superb job with the fireworks. The remand prisoners on B Wing clearly enjoyed it, though difficult to quite make out what they were shouting at one point! And the stray rocket that hit the roof did not, I'm glad to say, spark a break out. It was also the birthday of my wonderful Head of Comms, Carina McKeown, so we jointly cut the birthday cake! As I blog I look at the splendid lemon tree my sister gave me. The consumption of bubbles was on a grand scale as befits my 57 years! 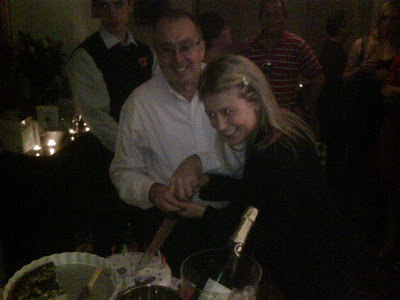