James Purnell: Secretary of State for Work and Pensions is brilliant. A star performer. He was our guest last night at the acevo young CEO dinner.

One of the young CEOs present emailed me this morning to say.

The above picture is the subject of a caption competition in the office. I shall let you know the result but feel free to add your comments!

This was another in the series of acevo young CEOs dinners (yes, I was there in line with our equal opportunity policy as the token oldie). Started off by Ed Miliband, this one was held at CCLA, one of our members in the City. They are one of the biggest mutual investment organisations for the third sector, and are great supporters as well as purveyors of fine dining to acevo members. As you can see it was most agreeable. (Future acevo dinners and lunches feature, amongst others, Jacqui Smith and the Archbishop of Canterbury, so acevo members book now as places are limited !)

It was a tremendous evening. The talent and brain power of the young CEO group is awesome. Not a whinge or moan in sight. And James clearly enjoyed being able to engage at an intellectual level and what is particularly gratifying for me is that a Secretary of State sees acevo at its best. Energetic, dynamic and go getting. Sometimes people in the sector forget that when they constantly complain (and I know there is a lot to complain about) the impression they can leave with government ministers damages the sector and our claims to be innovative and effective.

I have to mention 3 stars in particular as they played a major role in the debate - the hugely bright Nick Wilkie : he was at NCVO and now runs London Youth , the wizzy and engaging Matthew Thompson who runs REconomy CIC and the charming Simon Blake who runs Brook , the sexual health charity and who is also doing his best to turn Compact Voice into a forward thinking and dynamic body.

I have a word with James afterwards: He is launching his Green Paper on welfare reform on Monday so he gives me "heads up" on the proposals. Its great news for the sector. Huge opportunities for us to expand provision of focused client driven employment and training, and getting people off benefit and into work

We also talk about the problem of the sector's lack of capital. I tell him this is an area where FBE can help and we are going to look at this in our FBE Board meeting on Tuesday.

I'm glad to say he greatly approves of my tie. A man of taste clearly!

I remind James that the National Consumers Council conducted research into user satisfaction of public services delivered by the 3 sectors. In employment training the third sector out performed the public and private sectors by a clear margin.

So give us more to run James. And keep on pushing for reform. We need the true believers ! 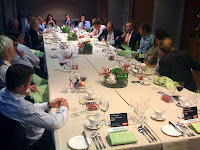