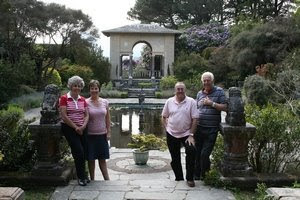 I have been painting the railings on the family vault. As you do at bank holidays. This is in Union Hall , Co Cork in Ireland ; a beautiful village on an inlet off the Atlantic. there is a small harbour and just above it my mother was born , And in the late 18th century Colonel William Somerville Limrick had a large and gracious Georgian mansion built here . It lasted till 1921 when the IRA thought they really ought to return to England ( they had not been there in 4 centuries of course ) and burnt it down . William had been out in India fighting for the Duke of Wellington ( another Irishman as it happens ! ) And his brother Paul was Wellington's Chaplain general , and appointed first Bishop of Calcutta but drowned on his way back for his consecration. Unlucky lad. So there is a Limrick vault in the Church of Ireland cemetery and I keep it trim . Ran out of paint and had to get another. hope they appreciate the trouble.
And that is a great excuse for fun . i have , we calculated sitting in the pub 68 cousins in the village. We had counted 61 over a couple of pints of Smithwicks but had missed some out when we checked up later with one of the said cousins.So if you visit the chances are you will bump into a blood relative , or at least someone married to a cousin of a cousin .I confess not the best of reasons to visit Union Hall though you'd love it if you did.I work on the basis I will probably be related to most of the folk I meet . Though there was a very odd family lurking the back of the pub when we were indulging in a spot of dancing on Saturday night . Looked as though they thought marriage too fine a thing to share outside the family ! And the dancing was of interest to students of the bizarre .Thank goodness no one from Third Sector was lurking with a camera as Itwirled around the pub to the noise of the MC shouting " now double back , cross ways , swap your partner , step on her toes . No sorry I made that last one up .
The Irish roads and hedgerows are amazing for the flora and fauna. Foxgloves, fuchsia , violets , yellow irises , all grow wild in abandon . Oh and drunken Polish sailors , as we saw one of those hiding in the hedgerow clutching his trusty bottle of sherry. A cousin helped retrieve him from the hedgerow and deposit him on the side of the road. We saw him the next day marching into the pub , so all's well that ends well.

Hi Stephen, I am Mark O'Connor in Hawaii, and a Limrick relative. My ancestor was Ann Limrick Starkey from Rosscarbery, Cork. I have visited Union Hall and seen where the Limrick family used to live, and tried to talk with a Limrick descendant at the post office there, but it had just closed. I am in Hawaii, my email is points@maui.net