Yes. Shovel in hand. And indeed what I would term a "pickaxe" but the 'ealth and safety briefing had a different name. I was an unlikely participant at the Green Gym on the pathway at Regents canal.


This is a brilliant project run by that great green space charity BTCV under the direction of ACEVO member Tom Flood. An army of some 400 volunteers are clearing the pathways around the canal to develop green space and encourage wildlife . As it happens just up the canal from " ACEVO towers" , our new home on the canal from september where NCVO will be our neighbours. If Stuart had opened his window he could have waved at the shovellors! Or indeed joined in!

Many of those who come as volunteers are referred by GPs as a direct way to help manage diabetes or mental health problems.

And they have a partnership with Camden Council to work with 25 similar projects. Its an example of the type of approach we will increasingly need in our health service as we move resources from hospital based medical care. This is central to the idea of a properly managed programme of support and advice to those with long term conditions like diabetes. Exercise is crucial,and it is bodies like BTCV who should be commissioned to do this more. They work with Diabetes UK nationally to promote the Green Gym. Let's have one in every district in the UK! Less leg chopping. More shovelling.

The volunteer organisers are inspirational guys. So Duncan and Chris, take a bow. We want more of you!

And in case you think this is all spin here is photographic evidence of a pick axe wielding Bubb! Impressive or what. 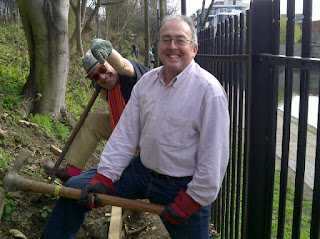 I have a grotty cold. Its difficult diarying sickness if you are a CEO but I really needed the comfort of a bed and cup of tea after my exertions (and my developing left leg limp due to excessive and unaccustomed use of a shovel). Not a long break though as I was determined to get to the St Giles Trust 50th birthday celebrations in the City. 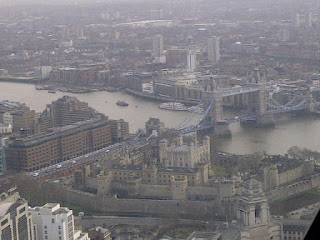 Here is a great charity working to prevent reoffending. With stunning success as we heard . Led by another acevo and third sector treasure: Rob Owen.


Chatting over the canapes I reminded our Lord Chancellor, Ken Clarke of the need to "denationalise" probation! He laughed but said they have a number of good initiatives on the way. He is a real believer in the rehabilitation revolution led by organisations like the St Giles Trust. Here is Rob listening to Ken talking. 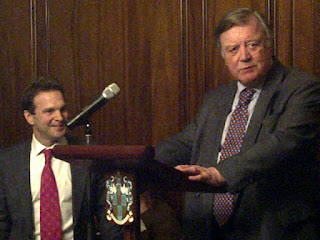 And a star cast of the former Cabinet Secretary Gus and the Head of the Supreme Court, Lord Philipps made speeches of support. Of course Gus is now Lord O'Donnell of Clapham. I could not help but remind him that I was Elected to represent the people of Clapham on the Lambeth Council (some time back and with not spectacular results!).


We mused on the current debate on an elected Lords. My view is that this would deprive the chamber of highly talented and experienced public figures who will not come up through the party machine. That would be a step back surely...

But will you keep up the green gyming.....