There can be few grander places to sit in a committee meeting than Malborough House ; former home of Queen Mary and now HQ of the Commonwealth . A rather incongruous venue for civil society but then the House is rather like the Commonwealth; grand and historic yet increasingly irrelevant to global communities in a 21st century? 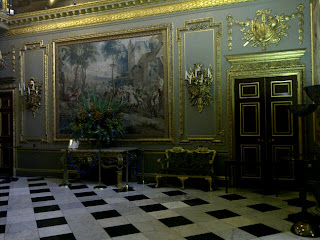 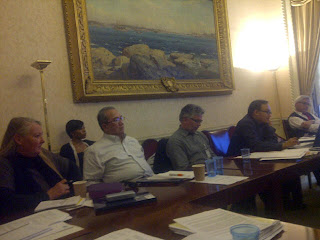 It's my last set of meetings as a member of the Commonwealth civil society committee. We have been debating how to respond to the famous ( or indeed infamous ) report of the Commonwealth Eminent Persons Group which was quite critical of the future of the Commonwealth without reform. One of their proposals was for a Commonwealth Charter which sets out basic principles that member countries should adhere to , for example on human rights.

This will be fascinating , not least because the next CHOGM will be held in Sri Lanka where the Government are clearly complicit in significant war crimes. And in African countries ( and others) there are still draconian laws , some of which are being strengthened , on homosexuality. it's frustrating being on this committee because it does not really play a major role in Commonwealth debates and tends to be patronised. The value for those of us on the committee is that it is a good network of third sector leaders across the globe. The Commonwealth comprises over 50 nations , large and small , economically strong and very weak. There have been some good leadership exchanges and information exchange to develop infrastructure. But it is small scale and the Commonwealth structures need to make more use of civil society organisations. The example of the UK's third sector - Government relations shows how our sector can make positive contributions to national policy setting. But in some parts of the Commonwealth civil society is at best tolerated and sometimes suppressed.So the role of a civil society committee , with a beacon for citizens and communities is important.


There is consultation on the idea of a Commonwealth Charter and ACEVO will be asking it's own NGO chief execs for their views .

It was good to get to the meeting from the challenge of doing a " webinar" for The NHS On commissioning the third sector. ! I guess I'm just old for this sort of thing. There was some office swearing as I tried to log in. Oh dear...I had to be rescued by my PA Bernadette!


Lots of debate on the question of marriage! I was pleased to hear from Derek McAuley who came to our ACEVO event on Tuesday and who represents the General Assembly of Unitarian and Free was talking of the need for " equal marriage". He is right.

I am very much in favour of Church Leaders speaking out on issues that affect society and our humanity. But I think the language they use should reflect their Christian outlook. I felt Cardinal O' Brien's outburst on this issue was offensive and in danger of encouraging bigotry.

But for lovers of history it is always educative to consider Church pronouncements over the centuries. The Church hierarchy in both the Church of England and the Roman church defended slavery as the natural order of things and condemned those idealistic citizens who campaigned for it's abolition. Later in the 19th century Pope Pious IX issued an encyclical against democracy. Again he argued that extending the vote to the common man was against church teaching. Incredible but true.

It is good that there are Church Leaders , especially from traditions like the jewish and quakers , who can debate this issue without the inflamatory language of the O'Brians and Careys .