A bookmark I picked up from the WA Association for Mental Health has 10 tips to stress less. In my role as a CEO mentor I bring them to you;

5. See the funny side of life,

6. Catch up with friends,

10. Reach out and help others.

I'm afraid last night I somewhat broke 4 and No 2 was thrown to the wind at the Royal Commonwealth reception with all that wonderful WA sparkling wine and fat full canapes. But the RCS seminar on " silence is not an option" with Plan International (ACEVO members both! ) was excellent.

The aim was to draw attention to the need to take action on discrimination against women, for example on early forced marriages.

But Baroness Kathy Ashton pointed out that this is not just a problem for young girls- many men have been forced into marriage,including many gay men.

There was a bit of fun when we had Michael Kirby, one of the members of the EPG, talking of the " high measure of secrecy" around the report , but he said they wanted the report to be published before CHOGM so civil society organisations could comment.

This caused a bit of tension as one of he speakers was the Foreign Minister of Trinidad and Tobago. His PM , as the host chair for last CHOGM had been responsible for saying the report should not be published. He tried to defend this by saying it was a matter " of protocol". This did not go down well with an audience of civil society leaders. 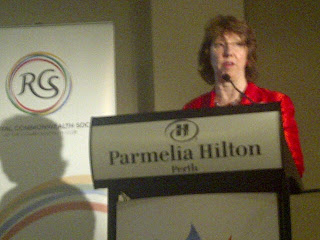 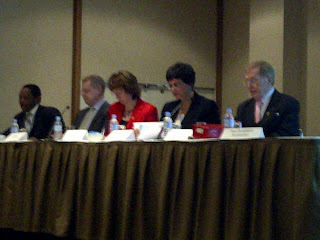 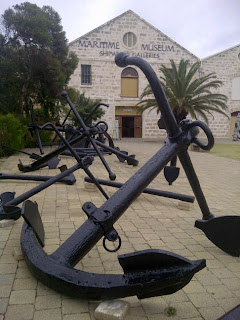 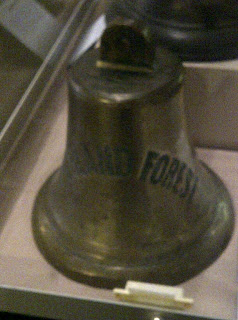 The bell of the Highland Forest

Earlier I had heard a rather interesting reflection on leadership from some speakers from Africa on education. We were told that one of the top 20 best performing schools in RSA is a primary school , near the borders with Mozambique. It has no water ( the teachers bring that in ) and so no proper toilet facilities. Yet the school is so clean. And they lack many resources. But what makes the difference is the quality of the school leadership. Another speaker said he had seen exactly the same in Tanzania. An interesting thought for us when we blame the lack of resources in inner city schools for poor results!

However I did observe one rule ;no 9. I popped into the Freemantle shipwreck museum. There is a most interesting exhibit; the ship bell from the " Highland Forest ". This was a ship that the great novelist Joseph Conrad had sailed in 1889 as First Mate. It stated in Gravesend, via Rotterdam to Java. It was his first voyage and one not without difficulty. He arrived in Java sick. Later the ship sank off the WA coast and the various remains have been recovered by divers !