So today the civil society committee got to meet with the Commonwealth Foreign Ministers. I get the feeling this was not the highlight of their visit, though there were some very effective interventions ( not least yours truly- or so William Hague said to me afterwards ). 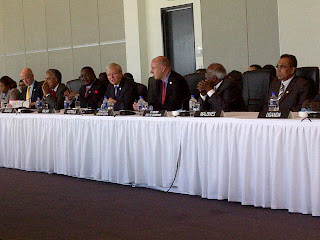 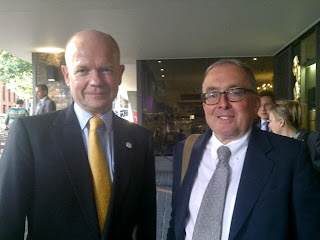 At a previous Foreign Ministers meeting yesterday a range of countries said they were opposed to the Eminent Persons Group report on a human rights Commissioner . One said their country's constitution did not allow them to support it ! Interesting constitution that doesn't support human rights eh? Another country- one with a historic struggle against racism - said the report was " too political". I'm hoping Australia, which is chairing , will pursue this. They seem to be working towards a Charter but countries are lining up against a Commissioner.

My intervention was to say that while we need a new Charter for the Commonwealth this could be merely rhetoric when what we need is the reality of protection for human rights which is why we must have a Commissioner for democracy and HR.

Kevin Rudd, chairing the meeting as the Australian Foreign Minister, awarded me the prize for what he described as the most potent and brief contribution of the meeting! It does make the point that in meetings like this less is certainly more! And I wanted this to be punchy.

William Hague took up my point and made clear that the UK was backing this recommendation. He said that the Foreign Ministers would certainly note the support of civil society for a Charter and a Commissioner. He also said that the secret report should have been published so that civil society as well as others could have discussed and come back with views for them to consider. He got a very loud clap from the assembled civil society delegates!

A little later Hague spoke at a plenary for the Peoples Forum. He said in a world of networks; the commonwealth is a superb example ; and civil society is core to those networks. He was also firm in support of the proposals to decriminalise homosexuality.

But , he said that in recent years the Commonwealth has not spoken out when human rights and democracy have been challenged. The Commonwealth should want to be seen as a standard bearer on human rights. The UK favours a Charter and a Commissioner to support that, to help refocus attention to democratic values.

A good meeting. Will they be bold? I doubt it , but at least I was able to make an intervention which I hope may have pushed the issue further.

But enough of that. At least I also got a chance to see a bit of the Commonwealth Festival, just by the WA Art Gallery. Sitting in the sun for 10 minutes listening to a band; now that's the life. And the Art Gallery has a great collection; splendid aboriginal art and good representations from 20th century English artists like Stanley Spencer and David Hockney.

And some more Aboriginal art. The first shows the legendary leader Yagan 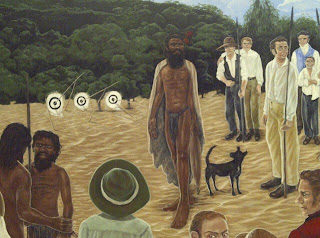 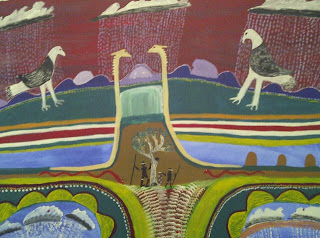 And finally a painting showing the founding of the Swan Bay Colony. Captain James Stirling watches as Mrs Dance makes the first cut in the tree to be felled to mark the inauguration of Perth ( named after the city of the Colonial Secretary's birth ) in 1829. 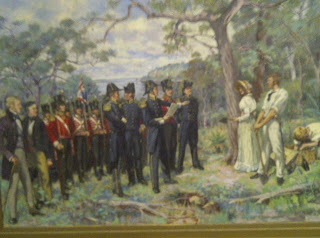