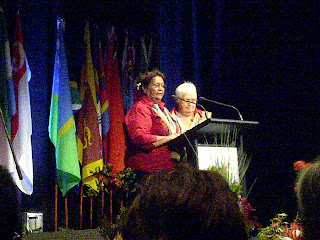 Traditional greeting from the Noongar elders

The Commonwealth's People's Forum opened today with a special event hosted by the Australian PM and Premier of Western Australia. The event was organised by the nattily named WACOSS- the WA Council of Social Services- the peak body for the sector here. Led by Sue Ash , the dynamic CEO . 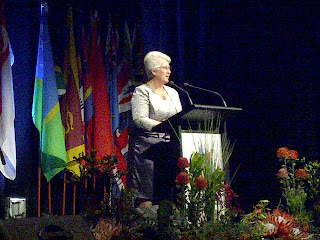 Julia Gillard spoke about the Commonwealth as its people, but frankly you would hardly notice. It's one of those throw away phrases speech writers shove in PM orations. She did pass on a monarchical quip however. Apparently The Queen suggested the Commonwealth was the original world wide web. Julia continued by saying diversity is its strength-commonwealth values are shown trough civil society and by their ability to bring light to bear on some of our most difficult problems. True, but regrettably some of the Commonwealth countries here don't actually like civil society! 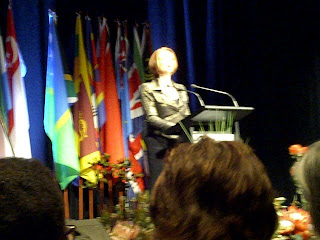 She said that Australia has some 600000 nfps - each making a difference. Driving change. But she did get down to business when she said the time has come to renew and refresh the Commonwealth - the secret EPG report ( which nudge , nudge , some of us have under the counter ! ) offers chance for reform. Importance of human rights. We should support it!


However the highlight was the speech of The Premier of WA Colin Barnett , who said we needed to tackle difficult problems . He talked of the role of the third sector as crucial to that. And , music to my ears, he said they have a model of engaging with the Third Sector through the delivery of services. It began in WA with disability services. 70% of government funding now goes trough third sector organisations. This is now being replicated in mental health. They have even appointed a Mental Health minister with budget. They take pride in partnership with the sector and have been leading on funding. They set up a forum with the sector and recently announced a staggering . Increase in funding for the third sector of 25 %. Yes 25%. That's an increase George Osborne and David Cameron please note!!! And he is a conservative! Goodness makes you want to move here!

And we had entertainment form the local Uni student. A Fantastic Medley of Aussie songs. But led by " Advance Australia Fair". Here here I say. 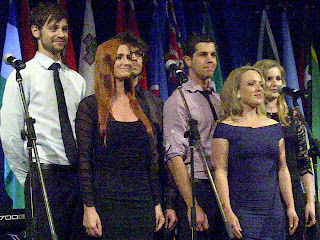 And now its reception time. More opportunity to enjoy the richness of Australia's natural resources; its wine!