The sector on the world stage

Civil society starts early here. Our plenary and workshops got off to a rousing start at 8.30 with a speech from the Secretary General of CIVICUS ( the world alliance for citizen participation ) Ingrid Srinath, who spoke on the global context of civil society. And a great contribution it was! 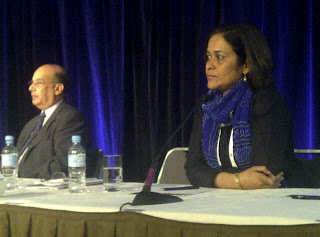 There has been a subversion of democracy, and worse; a "take over of mindsets" with the reduction of people to economic units.

She said we had fallen into what Gandhi had so eloquently described as the 7 social sins. These are;


Governments have deemed banks too big to fail but citizens too small to matter. The financial crisis has exacerbated the transfer of power and has allowed abuses of power. They have surveyed the state of civil liberties in 90 countries around the world and found most had recently passed legislation that had laws that constricted rights.

There is also a growing criminalisation of protest. So Civil Society is disheartened and faces growing threats.

Yet on the up side , the "arab spring" has shown the power of citizen movements. These peoples movements are challenging established order. Our power as advocates and innovators remains as strong as ever.

The survey also looked at trends in civil society. They found a volatile environment, unsatisfactory government- sector relations and where economic situation and funding has got worse. They also suggested that most success in civil society comes through networks but there is not enough of these. So how do we support what she described as " Joining the dots between networks and movements ". We can do much more. A message that resonantes strongly with ACEVO as it is core to what we do!

We then heard from Sir Ronald Sanders who was a member of the Eminent persons group and part author of the secret report we are not allowed to see but have. I'm glad to say that today's Times has a full report on this so read it!

He could not have been clearer; without reform the Commonwealth will die. Why; the overwhelming point was that the Commonwealth was becoming irrelevant to people. They don't see that the Commonwealth stands for values when many ignore them. Violated a on daily basis but no action taken again them. So a hypocritical organisation. That is why a Commissioner for democracy and human rights is now essential.

He deplored the fact that the report has not been made public. Result is speculation on it. Some governments say new Commissioner is a " policeman " but the idea is to stand behind human rights and to help countries to bring into compliance with C values. It cannot be right that dissent gives you a jail sentence of 20 years in some countries. This is the core issue for the CHOGM!

He wants a charter to set values but wants it fully consulted by civil society organisations. So he wonders why some governments fear these?

There must be greater people participation ; unless this happens, the Commonwealth is totally irrelevant to people. The Commonwealth can be an organisation that can serve humanity. One problem , he said was that some governments see civil society organisations as an opposition that they distrust. If the 14 core recommendations do not get accepted then his group will have failed. The key items are;

# a commissioner for democracy and human rights,

# a charter for Commonwealth values,

# educate people on homosexuality in all C countries,

# end to discrimination against women,

# work on environment- an expert group to look at which countries are in greatest danger from global warming- and how to support them ( eg Maldives and parts of Caribbean ).

I was able to take up some of these themes in my subsequent speech in the seminar that followed. I suggested a simple proposition; if you want a thriving democracy you need a thriving civil society and that means strong leaders. We have to invest in leadership in our civil society organisations. If you want to hold countries to account then it is not just good enough to target Governments , you have to ensure strong organisations on the ground who advocate and campaign and support those who are oppressed.

Plenty of meat for thought in all this I'm sure you will agree.