Preparing for Christmas...food banks and lobbying


A splendid weekend getting things ready for Christmas. And a good break before the hectic week ahead tackling the iniquity of the Lobbying Bill (the Commission on civil society Report is out on Tuesday).

The trees are up in Charlbury. One inside and one out: there is a tradition in Charlbury of putting Christmas trees on the front of our houses and lighting them up at night. Makes it very magical tottering back from the Bull! And the Hound enjoys the log fire, as you can see. 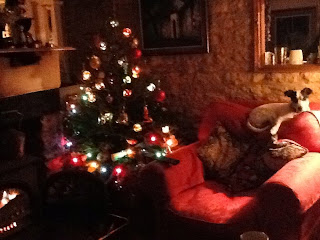 It’s shocking that for the first time in decades the Red Cross are now involved in helping families survive. In Charlbury we support the local North Oxfordshire Food Bank. In this last year they have given out parcels for 423 adults and 339 children. If this is happening in the playground of the wealthy Chipping Norton set there is something seriously wrong. And this is confirmed by research from the Joseph Rowntree Foundation.

The majority of people classified as being in poverty are now from working households, according to this research. The charity says a combination of low pay and increased numbers of people in part-time work have contributed to the current situation.
This adds strength to the campaign for a living wage, which ACEVO strongly supports (and adheres to ); indeed we were involved in its launch . Many members would like to do the same but I was talking to one member in the North West who said they can't do that because the contracts they have from the councils, who commission them, will not allow it. It’s time councils specified that when they commission they want their providers to demonstrate they will pay the living wage.

This is exactly the sort of debate we need to be having in this extended election period. Just how the various parties will tackle these issues?  How they propose to handle welfare reform or the problems of homelessness and youth unemployment. This is the very stuff of political discourse and our role is to bring the real life experiences of people and families to the attention of those seeking high office. So the debate on the terms of the Lobbying Bill is no mere technical discussion. The amendments we will propose on Tuesday are essential if we are to ensure the lively and vibrant discussion that civil society enables. It’s sad the media have given so little space to this threat to our democratic traditions.

And now I'm off to the Lords for some briefing sessions.