There are occasions in life when one deserves treats; and getting to 60 must be one of them? I love train travel and one of the world's great journeys is the South African Blue Train. As you can see I rather enjoyed it. 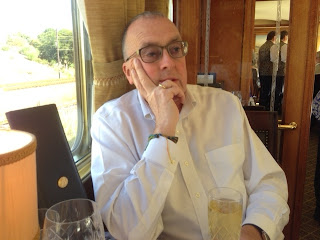 We were heading for the Victoria Falls; once you could take the train all the way there but alas Mugabe has put a stop to that, so we flew the last part from Pretoria. It was a marvel. 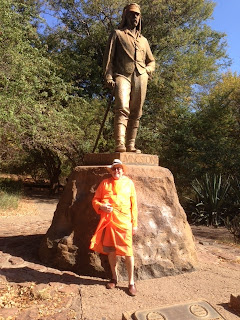 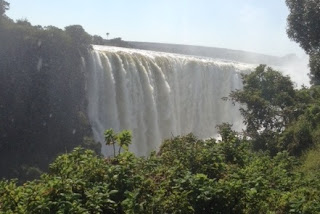 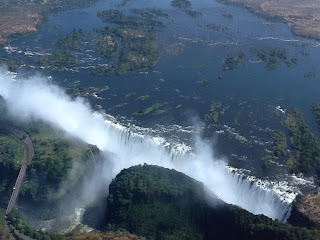 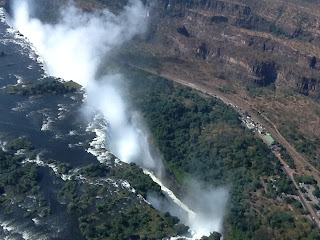 Walking round the Falls is a wet experience. The spray from the thundering waters reaches high and far. You need a raincoat but I still got drenched. So the helicopter flight across the Falls was a must. Cecil Rhodes great dream was a rail line from Cape Town to Cairo. It never happened but part of the line was to cross the Falls and in 1905 an English construction company built the magnificent rail bridge across the Gorge. As it was a NE company it rather resembles the bridge on the Tyne, which is not mine as the song goes! They also built the Victoria Falls Hotel at the same time. Opening in 1904 this hotel will forever be Southern Rhodesia. A great colonial edifice where the sun never sets on the somewhat faded Imperial glories. Queen Mary and King George loom over the drawing room and the lavatories are a marvelous period piece such as one now rarely sees in the UK. We were hoping to stay but it was full. I did however do lunch; fish and chips and mushy peas (though the fish was a tasty Zambezi river bream) and then High Tea (the full works: scones, perfectly cut sarnis and cakes). Sitting on the veranda you get a marvelous view over to the Gorge Bridge and the spray from the Falls. The clue to the fact that it is not England was the appearance of a group of wart hogs and Guinea fowl on the perfectly manicured lawns! 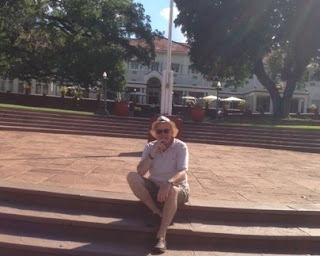 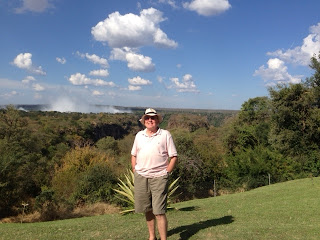 We also took a stroll over the bridge into Zambia. It’s the best spot for a view of the feckless young people who throw themselves off the Bridge. Bungee jumping its called. Madness I say. The stroll did however entail a return trip through Zim immigration and customs.
As it turned out we were lucky not to get a room at the hotel as we ended up in the Gorges Lodge. It turned out to be one of the best places I've stayed in. Just 10 thatched lodges set along the top of the Gorge, carved out by the force of the flow from the Falls over the millennia. Far below runs the mighty lower Zambezi. And on the opposite side is Zambia. Sitting outside our Lodge we are 3 feet from the edge. No 'ealth and safety officers have been here to erect safety barriers so too much drinking is not recommended. And I have sat here listening to the sounds of the Bush and watching the sunrise and the sunset.
The photos from here give you an idea of the beauty and the quiet. 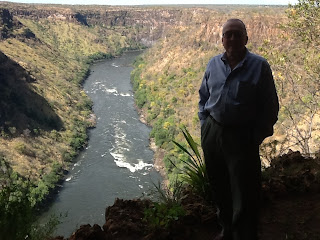 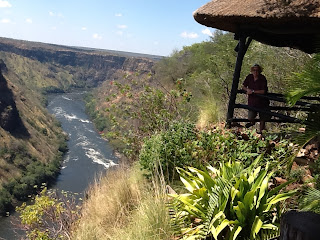 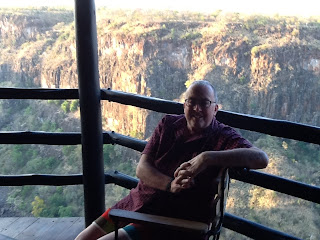 We are some 23km from the noise and bustle of the town of Victoria Falls. A typical African town but the only difference is that you can't actually use the local currency. Everything is sold in dollars or rand. So a strange experience popping into the local supermarket to get a bag of loose leaf Zim tea to pay in dollars and get change in rand. A commentary on the deprivations of the Mugabe regime that he has so far devalued his national currency that people now don't use it. Lads on the street were keen to sell me the trillion dollar Zim bank notes that now have only amusement value. But it's a happy go lucky spot with few signs of political turmoil, though one hopes for change as this is a country rich in natural resources and great beauty. They deserve better governance. 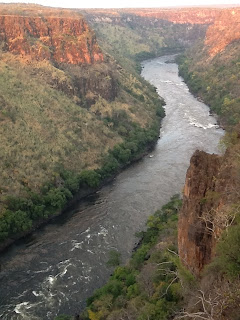 I use this Article to show my assignment in college.it is useful For me Great Work.
gorges lodge