Well I now have a share of a desk ( 6th floor,attic, at back) and a pass for DH. After the No 10 breakfast roundtable I spent the day in the Department trying to get to grips with the new role I've taken on. It was a bit like new boy at school as I wandered around , getting lost and meeting lots of interesting people whose names I only vaguely remember ! A great first session with Sir David Nicholson, the NHS ceo. A meeting of minds on some of the challenges we face on the commissioning front.

I have been assigned a minder; a clearly top class civil servant who is heading for Permanent Secretary at some stage ( unless we head hunt her for the third sector , of course).

And a first! The DH press team persuaded me not to take up a BBC interview slot. My staff back at ACEVO towers nearly expired with the shock. Mind you, it won't last!

But I feel I'm beginning to get my head round some of the key issues. I suspect it is important for me to focus on big picture, on what we can change for the better and not get deluged under the detail of a 600 page Bill.

The third sector roundtable at No 10 was both hugely encouraging and inspiring. We had Lansley, Clegg and the PM. I must say that whilst many people have been saying that Andrew Lansley has not communicated well , he was very clear and articulate on the purpose of the reforms, the fact that it is about putting choice at the heart of reforms and that competition is a means to an end. This is something I feel strongly is right.


One point that emerged strongly from a question from the PM is that many members feel that GPs know little about the third sector and if they commission they may not commission from us. We will look at this- a meeting later on with officials and we discussed how we can work with GPs to provide information and support for consortia. I suspect the new NHS Commissioning Board can also play a role in setting frameworks? We are plannig a top level dinner between leading consortia GPs and top health charity CEOs ( just one of many events we are planning!)

Then it was off to the Cabinet Office to celebrate Pat Samuel's retirement from the civil service. I've know Pat for years- from her time in the third sector unit in HMT and then in OTS- OCS. She is an outstanding example of a fine modern civil servant. She has been a true friend of the sector. The secotr establishment turned out in force to celebrate.

Here are the acting CEO of ACEVO, Seb Elsworth and little old me with Pat! 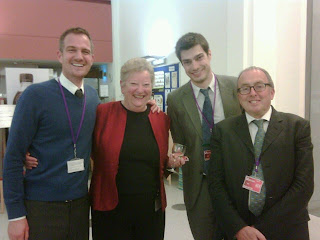 We have suggested to Pat she will be wasted in retirement- and we have some superb internships at ACEVO we can offer.....