I emerged from the hell hole of what was once known as the London tube to a meeting of the Department of Communities and Local Government's Third Sector Advisory Board today. The joy of an air conditioned building! Or, I should say as it is now known, "The Voluntary and Community Sector Board". The first under the new regime and we had three Ministers attending; Andrew Stunnell, Nick Hurd and Greg Clark.

It went well. I made three points.

#. In working to locality you must still retain a framework where DCLG sets out expectations from what they expect from Councils and their relationships with the sector. Power cannot just be given to Councils and hope they will then empower the third sector.

# do not forget the crucial work of national charities who are often working locally and who provide crucial support for communites of interest; the profoundly deaf or people with autism for example. Localities are not always progressive!

# we need a big drive to ensure more service delivery through the sector. I spoke about cost effective, citizen focused services that we provide.

An interesting discussion on this. Greg took up my "framework" theme. He also spoke about the idea that there may be "rights" for people, or for the sector, we can enforce.

He suggested we work on the concept of the framework. This might include, for example, reforms on commissioning.

Nick Hurd was refreshingly honest about the problems we will face working with local Councils in the face of major spending cuts. He said they were not into direction but were into persuasion. He wants us to provide them with examples of Councils who are working well with the sector or have interesting schemes. Comments to the Blog please on this.

Back into the heat and off to the Office (not air conditioned!).

Although the majority of British employers were refusing to allow workers time off to watch the England match ACEVO knows better. We had the match on in the office and even supplied refreshments! Though the cans of Fosters Lager were certainly not my idea! See them here... 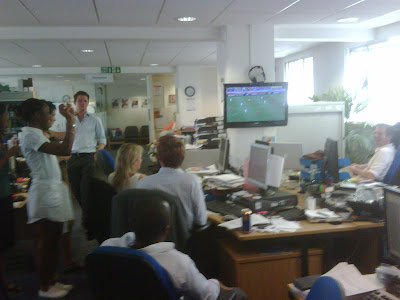 I'm afraid I was not watching as I had an interesting meeting with Dr Carlo Rossi Chauvenet from Banca Prossima. This is a new Italian Bank set up by Banca Intesa, which is Italy's biggest bank. It works entirely with the third sector in making loans. It is capitalised at 100m eu. Interestingly this puts the work of Charity Bank here in the shade (with only £30m). It will not distribute profits for 10 years and after that they will be split 50-50 between the sector and the main Bank. They are interested in the work of SIB and of impact bonds. I said it would be fascinating if one day we did work together across Europe. Social Finance is a new but exciting opportunity for the European third sector. It is fascinating that there is a growing sense that the commercial sector can make bankable loans to our sector. Pity there is no major English Bank making a decision to fund the sector in the way Banca Intessa have!

Highlight today? Meeting Eric Pickles MP. A fantastic discussion about the role of the third sector with Local Government in delivering better services and in democratising the commissioning process. He wants DCLG to be looking at how they can reform processes and work more effectively across Government. He was passionate about how commissioners fail to consult with the very people who will be affected by the services delivered. He was very supportive of the need for, as I described it, "democratising commissioning".

We talked about the power of social finance and the work of the Social Investment Business, especially in delivering the community builders programme. I gave him some great examples of how loan finance has transformed community enterprise.

He is keen to see a real emphasis on neighbourhoods in their reform programme. He wants to see a revitalised Local Government that works with and for citizens. It was a hugely positive and optimistic meeting. I have been a great Eric fan since I first met him in the 80s. I hope this will survive the next five years!! I know that many many Councils will be making cuts that deeply affect communities and our brave and bold sector. Hard times ahead. And it is ACEVO's job to defend, as well as promote, our members interests.

Sorry for sending this as a comment couldn't find your email address.

I'm Adam from Shared Interest (www.shared-interest.com). Shared Interest is the World's only 100% fair trade lender. We are a UK based leading ethical investment co-operative (owned by our 8000+ members/investors).

We'd be very pleased if you can write a blog post on Shared Interest. We also have a video which helps to show the effects of the work that we do http://www.youtube.com/watch?v=TYbUERFu_50. You're welcome to use the video on your website/blog/newsletter. If you need any more info or help putting the video/link onto your website please let me know.

Camden Council have partnered with BTCV's Carbon Army in developing an ambitious project to plant Community Orchards in housing estates and sheltered housing across Camden.

Camden Council have been actively canvassing local interest, with the key pre-requisite being that local residents take ownership of their new orchard. BTCV is facilitating each event with a focus on engaging as many residents from the local communities in the planning, preparation and planting.

Local residents will also be offered follow-up training to ensure they know how to care for, prune and make the most of their new local food resource.

The projects aims are to promote local interest in food growing, green housing estates and encourage community groups to develop communal gardening projects in their neighbourhood.