The sector and political reform

The 3 political parties are now in a bidding war to see who can be more radical on constitutional reform. This is yet another opportunity for the third sector.

Though it is interesting that we have yet to see a speech from one of the 3 Party leaders that talks of the role the sector can play in revitalising our democracy. For example, the major speech by Charlbury MP and Leader of the Conservatives David Cameron never mentioned the sector, although he did speak about revitalising neighbourhoods. The PM's proposals do not include a sector role. Yet it is the strength and vitality of sector organisations, big and small, national and local that often provide a challenge to state domination. It is vigorous local community groups that stop bad councils and big developers spoiling our localities. It is national charities who challenge world poverty or environmental damage. It is the great childrens charities who keep councils and governments up to the mark and promote better policy for children. It is often third sector bodies who are at the forefront of new policy and legislation. We are out there battling on behalf of communities or unpopular causes.

Yet politicians still see a sector that works small scale, doing good rather than as the voice of communities. So we need to campaign to ensure our role in providing a more diverse and pluralistic democracy is recognised. It is something we should look at in the Impact Coalition and sector umbrellas should consider how we work together to promote our voice. ACEVO is now looking at how we promote a campaigning and dynamic charity sector at the heart of he life of our nation.

The PM has proposed a National Council for Constitutional Reform. It is essential the third sector is well represented on that Council and the sector's leading Chief Executives are there around the table. And wider than that, the sector needs to be arguing for our role in reform. 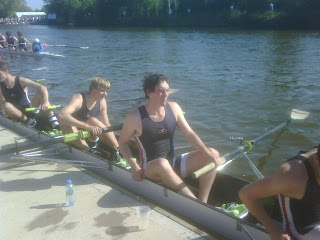 Well, the weekend was glorious. I was with most of my family down on the banks of the Isis (I believe also known as The Thames) at Oxford for Eights Week. My nephew Julian was rowing in the Keble Eight and remembering its not the winning that counts but the taking part! The voluminous picnic hampers provided by my sister-in-law also provided cool storage for my eye drops! You will see I am bearing up well, as I stand next to my nephew in his rowing gear, but I appear to have shrunk? And my College came Head of the River, for the first time in 22 years. A great aid to my recovery. 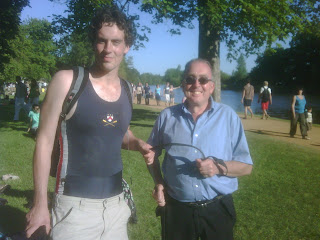