A great morning . I was taking a group of my leading members to meet with the Tory front bench spokes in Justice , Employment and Education . This initiative flowed from meetings I have been having with Francis Maude MP who is taking a lead role in putting together the Conservative programme for Government and is particularly interested in how to get strong third sector involvement in commissioning and the roll out of public services.

I was impressed with the depth and the scale of the discussion and the radical nature of some of the Tory proposals . There was a real energy in the room. I think their programme in prisons and probation is particularly exciting , and Teresa May MP was impressive in her outline of plans on employment and welfare reforms.And she was ably backed by rhea great David ( soon to be Lord ) Freud ; he of the DWP-acevo task force . David Burrowes MP, who is one of the Justice team ,I had not met before but is clearly a rising star . Impressive in his grasp and vision for a radical approach on prisons . The key here is their plan to incentivize Prison Governors to tackle the problem of high levels of re offending . I have to say that whilst I welcomed the announcement by Jack Straw MP , the Lord Chancellor, on more competition in prisons and probation the Tory plans have a much stronger focus on the importance of rehabilitation and the role our sector must play. i doubt they will be sidetracked by the combined power of the prison and probation officers unions who think the service is run for their benefit rather than to achieve a reduction in crime .

I had also not met Nick Gibb MP , the shadow minister for Schools . He is clear that the sector needs to be enabled to run more schools directly and to break up the current state monopoly here .

But I also have to say the team I took with me were high firepower. Absolutely focused and clear . not a whinge in sight . All very practical in how we can work to implement reform and growth in sector direct provision of services. So who are these paragons ? Neil MacIntosh who runs CfBT , the irrepressible Debbie Scott of Tomorrow's people , Tony Hawkhead of Groundwork , Virginia Beardshaw who not only runs the impressive ICan but is an acevo trustee , the impressive Joyce Mosley , who invented the probation service ( well , her organisation did )and 3 brains Matthew Pike . The intellectual power of this group was matched by their vision and determination . I felt proud to be there and to watch as this group engaged . It is the sort of practical advice and experience that ACEVO likes to bring together and harness to help shape public policy and programmes . Others can do the grand policy and the whines . We do the get stuck in and sort stuff . So whether that is the Current Government , the Labour or Liberal parties or the Conservatives ; it is our job as the voice of Chief Executives to ensure policies are right for the sector and promote our values and aspirations.

Back to a discussion with Capacity Builders with my Futurebuilder Chair bowler hat on. It was interesting that one of the themes that emerged this morning way the importance of building the sector's capacity to compete , as well as getting access to capital . We had discussed with the Tories the value of a Social Investment Bank . Francis Maude was keen to ensure that the new Bank is independent of government and not an NDPB .He is absolutely right on that . Spot on . I said we will fight hard to ensure that is the case . Nick Hurd said they were worried that the Big Lottery Fund may be given the dormant cash money . Again I said we opposed that . Of course , if the Government did that it would be but short lived as they intend to free up the BLF from the confines and shackles of the NDPB status and make it an independent Foundation . They are right on that too . 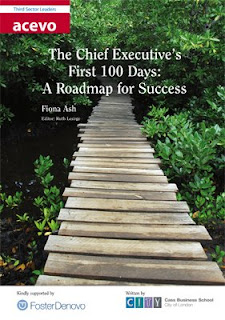 And finally , Barack , blessed be him , is celebrating his first 100 days as American President. What a great man . And what great achievements . The audacity of Hope . The Thought for the Day slot on the Today programme by Bishop Jones of Liverpool was very moving about how he has been a beacon of hope to many across the world . He has had a good 100 days . Perhaps he was reading the ACEVO manual for CEOs on their first 100 days. " A Road map for success " . To get yourself a copy click here. Hard to imagine what CEOs would do without ACEVO there to support them .