There is something deeply interesting about hearing Leaders' speeches. I have heard many over the years from Conservative and labour Leaders. You need to be there in person, in the Hall to get the full experience though. Watching on a TV screen and you miss the build up and the crowd hysteria. This was a good speech. Obviously all those comments about lists and rushed and shouted delivery have been listened too.

Of course I was waiting for the reference to the third sector and it came! I tried to get a standing ovation at this point, or even a clap ( at least more than my one!) But to no avail. Still he talked of the sector and name checked Ed. 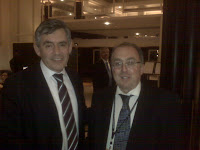 I saw him afterwards and told him I was pleased to have the recognition in his speech for our sector. He said the role the sector plays is vital for a healthy Britain and said thank you for what we do. I guess he meant the sector at large but perhaps it was acevo as well! Anyway here is a picture of the leader of the third sector meeting the leader of the country. Good job I had my Head of Policy on hand with his Blackberry camera! As I said to Gordon; "wonderful what you can do with mobiles these days".
I went to a very interesting fringe meeting on the Social Enterprise Bank put on by the New Economics Foundation. Sir Ronnie Cohen and Phil Hope were speaking. The Government has said it wants to use the Banks unclaimed assets to set up a social Investment Bank which would drive more capital into the sector. It is a crucial time to argue this case as we need to reinforce the political will to make this happen, even though the Banks will now be resisting strongly.
Phil Hope, the Third sector minister, is encouraging. He believes this reform is vital. I talk to Ronnie about this and we agree we should step up the pressure. I greatly admire Ronnie. This is the guy who effectively created the private equity market and his venture capital firm, Apax, is a world leader. He speaks clearly and cogently on the need for a better approach to funding the sector rather than spraying and praying, and the need to move from a patronage and dependency grants culture he is clear that if we increase the supply of capital, the demand will follow and increase. He is right. I want to look at how we might promote a campaign for the SIB. This could make a lasting difference to capacity building the sectors asset base and enable more money to circulate in the sector
I meet Phil the next day to talk this through, update him on FBE and on acevo. Phil is a good Minister. Hope he remains in the reshuffle but he does deserve promotion as he has been highly effective.
And as for partying I am so tired I retire back to hotel early. The ITN party looks inviting but rather full and hot, so a pleasant Chinese with Seb and talk through our day with the Perm Secs on Friday.

Mr Bubb,
I read your blog for a variety of reasons; your views on public service delivery, your thoughts on governance in the sector etc.
I can now add another reason; humour - "leader of the third sector meeting the leader of the country" - what a hoot! Thanks for brightening my morning!