An interesting day to be going to the hospital for a checkup, with all the news about the Health Bill.

There is a brilliant analysis of the problems of health and social care in the Times by Alan Milburn. As he says the NHS is


" being hit by a toxic combination of dramatically changing health needs and rapidly dwindling resources...we need a new wave of reform to replace the existing model of how we deliver care ....based in the community , not obsessed with the hospital; focused on prevention rather than treatment and it should put power into the hands of the patients rather than providers. "

He goes on to point to how we tackle long term conditions. It was the issue I highlighted in my report on choice and competition for the Government. As he says diabetes. Among adults is expected to rise by 50% worldwide in the next 25 years.


" What differentiates such diseases from other forms of illness is that they become a permanent a permanent fixture of people's lives. They are with them 24/7. So what pateints do to manage their own conditions in terms of lifestyle, diet and excercise becomes as important as what clinicians do. They should not be treated as passive recipients of care in a system that denies them power and responsibility. Instead they should be given greater control over their own health. "

So echoing my own recommendations top Government on personal health budgets and he argues that healthcare must change from being "public sector to public service". As he says monopolies rarely deliver efficiency or respond to customer demand.


Spot on Alan. And these argumemts need to be heard. Our sector should be playing a massively increased role. That's not " marketisation". That's choice. That's how we deliver a people focussed service.


I'm not sure frankly that ditching the Bill as he recommends is right. We are where we are and we should push ahead now and make the new system work. But let's beware the vested interests who oppose change; who argue against transferring money out of hospitals ( that means closing many ) and who want to stop alternative providers like charities and social enterprises from delivering more.

And on the subject of customer focus a story from Manchester !

My last third sector visit on tuesday was to the Manchester Art Gallery. A great collection of Art Nouveau and a fabulous craft gallery showing off the brilliance of design and manufacturing. But what is it about gallery Directors. They clearly all have great eyesight. The signs for the paintings are tasteful and small. Design over function. The problem is that for poor partially sighted folk like me we need function over design. I had to take off my glasses to peer at the picture notes and this excited the attention of an over zealous gallery attendant who assumed I was up to nefarious things ( stealing picture or perhaps spitting at it? ). As a customer and on behalf of my RNIB Chair, the rumbustious Lesley Anne ( as she now is known in Third Sector) I gave some helpful feedback.....

And enjoy the Lowry.. 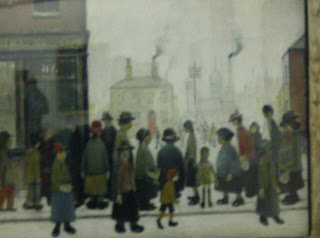 Incredible information, good work. This is the issues highlighted in the report on the government's choice and competition. As he said diabetes. It informative for me.