Hard to believe it I know, but nearly 60 years ago I was born in a small village in Kent and this weekend I was back there. No longer a village but urban sprawl. Strange to see the house where I was born (no nonsense about hospital births in those days!). Nurse Massie the midwife arrived hot foot on her bicycle while Father cycled into town to alert various parents and then off to school to teach. So no nonsense about fathers interfering in such matters then either. He arrived back home after tea to his first born!


I had been invited back to St Matthew's Wigmore to talk to the congregation about my work. Grandly entitled " An Evening with Sir Stephen Bubb" there were also representatives of 13 local voluntary groups who had an exhibition in the Church Hall.

I was one of the first boys to be confirmed and take his First Communion in the newly consecrated church.


And good to see lots of old friends. And indeed they were by now , like me, many years advanced . It was also good to see that one of the groups involved in the display was the Medway Towns Cyrenians, led by ACEVO member Karen Hurley, who was enthusiastic about what support and services ACEVO gives members in small charities. Great to hear.

I stayed overnight with old friends Anne and Mike Echlin in West Malling- just down the road from CAF. And Sunday I went with my 2 Aunts Dorreen and Joan , my Uncle Peter, Mother and Father and sister Lucy (and her gentleman caller John) , to my cousin Colin for lunch in Hartlip. I had been told not to talk "bonuses" (he being a banker!) But too late. He had read the Blog..... 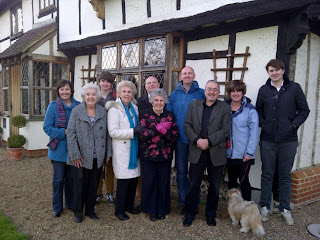 Still, he did not begrudge me champagne.

Now I'm off to the much publicised NHS Summit in No 10 with the PM. I shall be arguing that whatever the debate on the Bill there are major challenges our health and social care system face. We need to debate how we tackle growing numbers of people with long term conditions, the challenge of an ageing population and the need for radical action on social care. We have a way forward with Dilnot. We need to get cracking on that and focus attentuion away from arguments on the Bill to what citizens and communities need from our social care and health service.

What, no blue plaque yet? It can be done during a lifetime. Peter Tatchell has one already, so you'll have to be quick to get yours before the age he did.