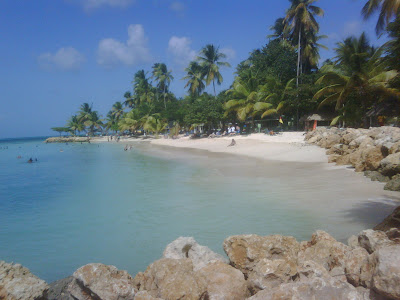 I am unused to rising at 4.30am but that indeed was what I did in order to get the first Ferry across to Tobago. Escorted from the Hotel with a Police Escort!

Tobago must be one of the most gorgeous islands in the beautiful Caribbean: lush forests and palm trees dropping their coconuts on the golden sands of the spectacular beaches. They like to describe themselves as "the capital of paradise" and you can see why!
We started at a local school where we had a presentation on various civil society organisations.

One of the best established on the Island is Environment Tobago - ever watchful of degradations against this beautiful island. They have a particular watch against attempts to open oil and gas drilling near the Island . They have been mobilising communities against crude attempts to exploit and spoil this wonderful island. It was also interesting to hear about Rotary. There are two Rotary Clubs in Tobago. I must admit to knowing little about Rotary and probably irrational prejudice about them. I had not realised it was founded in 1905 in Chicago by a businessman who was sick of the unethical business practices he saw. So this is an organisation ahead of its times in advocating corporate socially responsibility. Interestingly they are leading a big campaign to raise awareness of Diabetes and campaign to get better knowledge about good diet.

We also heard about some of the dissatisfaction with the union of Tobago with Trinidad. Before 1898 Tobago was a separate colony. Many people feel that the central Government in Port of Spain has too much power - for example in allowing exploratory drilling by Petro Canada with no consultation with anyone here and disrupting the livelihoods of many local fishermen.

Now let me introduce Matthew Limrick, aged 10, media star. My cousin, twice removed, appears on national TV every hour in an advert filmed to welcome delegates to CHOGM. It stars a number of young people from across T+T and the Caribbean . Here he is: 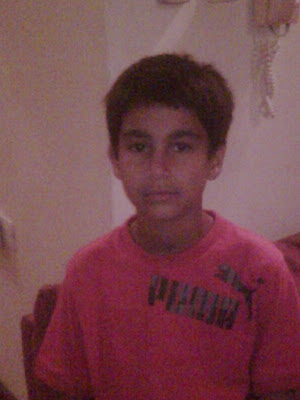 I had a superb supper with the Limricks last night and caught up with family news.

Well we have all had lots of excitement over the MPs expenses scandal back in the UK. So interesting to be in a country where expenses and other "perks" are very much part and parcel of the Parliamentary life. Wednesday's main Paper had a front page photo of the Prime Minister being presented with a gold hand crafted Swiss watch specially made for him for CHOGM. The paper reported lovingly that it's worth thousands of dollars. I am afraid there is a culture here where such gifts and other arrangements are very much part of the culture. Of course I may be wrong and he intends to hand this over to the State, as would happen in the UK ? Or perhaps give it to a cancer charity for a fundraising auction?

Parliamentarians apparently have fingers in lots of lucrative pies , especially property. Planning laws are elastic and the Government is closely involved in running Hotels etc. Is it any surprise that in a gas and oil rich nation some 40% of people do not have running water in their homes?

There is great controversy here over plans for building an aluminium smelter. The wishes of the local communities have been ignored, even though the risk of cancer will increase for people who live close to it. And a large amount of beautiful forest will be sacrificed. If we are going to tackle climate change then all countries need to do their bit. And that includes Trinidad and Tobago. Amazing that in a country with so much sun I have seen not a single solar panel. Certainly not on Government buildings - not even newly erected ones.

The wealth that oil brought has certainly enriched some , just not the people. So perhaps we should keep our own problems over expenses in proportion.

Back to the UK- but sticking with climate change: Yesterday BTCV (the country's biggest conservation volunteer body led by the magnificent climate campaigner Tom Flood: ACEVO member naturally) launched its biggest-ever climate change campaign. BTCV believes that actions speak louder than words. So while the world talks at the UN Climate Change Summit in Copenhagen in December, BTCV and thousands of UK citizens will take practical action to tackle climate change. (click on this link for the website)

During December, BTCV's Carbon Army will be taking frontline action on climate change.

Shadow Minister, Nick Herbert, and BTCV supporter, Charlie Dimmock, will join scores of volunteers who will be planting a kitchen garden at Waterlow Park, London. Kicking off their campaign with a local food growing project to reduce the carbon impact of food miles.

And I am doing my bit in my own back garden at Clinks. We can all grow more food ourselves. My tomatoes in particular were a marvel ! Make up for my own carbon miles!! And tom will no doubt help me plant a forest to atone for my travel!

But now I must stop. It's off to experience the brilliance of the natural habitat at Bucco Reef! 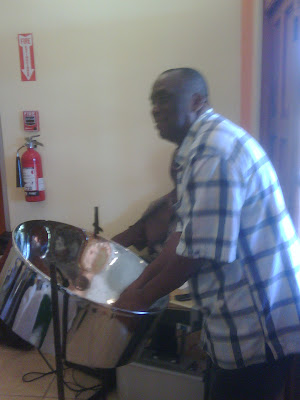