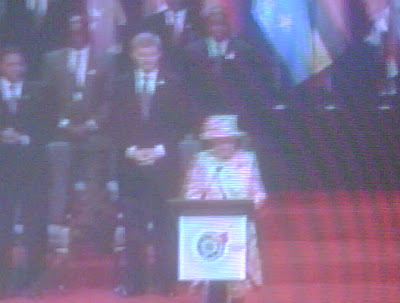 Well the day of the official opening of The Heads of Government meeting has arrived. The Queen came Thursday to great a fanfare - there is great interest in her visit. And everyone commented, as the headline on the main newspaper put it, on the "Green Queen". She was wearing green coat and hat and excellent it looked too.
The Official opening gives the host country a chance to showcase its history and culture and Trinidad has built a new Academy of the Performing Arts and this meeting is the first to be held there. It's a mini Sydney Opera House but non the worse for that! Great controversy over the building as it was financed by China and built by imported Chinese labour - so not exactly creating jobs for local people! Indeed shockingly many of the workers were convicts taken from Chinese prisons.
After the opening the Heads of Government go off to a retreat. I do hope Gordon gets some sun. He clearly needs it! And let's hope they manage an accord on Copenhagen. Gordon Brown has said he hopes the CHOGM will be a springboard for Copenhagen- which is why having the likes of Sarkozy and Lula from Brazil is important. He has also proposed a Fund to support poorer and more vulnerable nations. It is perhaps more likely there will be agreement in the Commonwealth on the need for action than elsewhere.
Embarrassingly for T+T's Prime Minister it has been revealed that the country is one of the world's worst polluters on a per capita basis.
You will not be surprised to hear that the Opening ceremony which should have started at 10 am was delayed nearly half an hour. I was not surprised!
So our job is over. Time to pack those bags and return to England's green and pleasant land (though somewhat soggy from what I hear).

In the meantime my effervescent Director Filippo Addarii has been busy - this time seeking an audience with the Pope no less! He has certain connections in the Vatican naturally.
The idea of the meeting is in response to an Encyclical from Pope Benedict in June that emphasised charity as a solution to the economic crisis.
Catholic organisations have a significant presence in the third sector in the UK and throughout Europe, but Popes have never been interested in the sector as a concept before, The Encyclical puts it at the centre of economic theory."

Hmmm why were you not surprised that the Queen's speech was late? Stereotyping the Caribbean or simply showing your own colours!