Just one more meeting before I depart- a roundtable between the Commonwealth Foreign ministers and the civil society committee. A rather grand affair with a rectangular, and very long roundtable...and country flags for the Foreign Ministers. 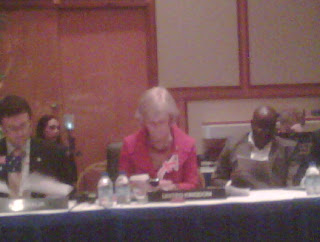 Foreign ministers for Australia, the UK ( Glenys Kinnock) and Belize

An old friend , Glenys Kinnock , representing the UK Government ,was there and made a number of good interventions. The Foreign Minister of India was particularly impressive talking about the "transformational and development role" of civil society organisations and how they often act as a " catalyst for change". This was in stark contrast to the Foreign Minister for Tanzania who gets the wooden spoon for objecting to our statement condemning anti homosexual laws, especially the proposed new laws in Uganda. Amazing how he thinks that a section of his poeple should not have human rights. Delighted to hear from Glenys she has been taking this issue up directly with her colleagues.

Rushed straight off after the meeting for some personal first hand experience of the T+T health system....my eyes giving me problems so had them checked out and remedial action taken.

And on the subject of health , back to Andy Burnham. A very interesting article by Paul Richards , the brilliant Independent journalist. Let me bring you some of his pearls;

"When Labour’s programme reflects the demands of consumers, it tends to meet with electoral success. That’s what happened in 1945, 1966 and 1997.

When we retreat into a comfort zone, and allow policy-making to be captured by vested interests, we lose the support of the majority of the electorate.Which brings me to Andy Burnham..... I think he is making a big political mistake. By endorsing the health unions’ campaign that in-house service providers should be given preferential treatment over private, voluntary or co-operative movement service providers, he risks four things. One, it looks like Labour is in hock to a powerful trade union lobby, which never goes down well with the voters. Two, it is a slap in the face to the voluntary and mutual sectors, who have been developing excellent and innovative services within the NHS. No wonder they’re so annoyed. Three, it makes it look like Labour’s NHS reform programme has ground to a halt, which puts Labour on the wrong side of public opinion. The public is always more ambitious for the NHS than the politicians..... In a general election year this is especially daft.

In my experience, you don’t deal with the unions in the hope they’ll say thanks. The modus operandi of trade unions is to pocket the concession, and move onto the next one. It is strength they respect, not compliance.

Today we have a better NHS because we put the consumers of NHS services – patients and their families – first, and disregarded the siren voices of vested interests.

The point about NHS reform is that if you take your foot off the brake, NHS improvements don’t slow down, they go into reverse. "