Yesterday was All Saints Day and so the Feast of title at my London church , All Saints, Margaret Street; the magnificent Butterfield Church currently celebrating its 150th Anniversary.
I went to Evensong and Benediction with the added attraction of the attendance of the Archbishop of Canterbury who preached the sermon and officiated at the Benediction. It is not often that you will see Benediction in an Anglican church, still less have the Archbishop conducting it. 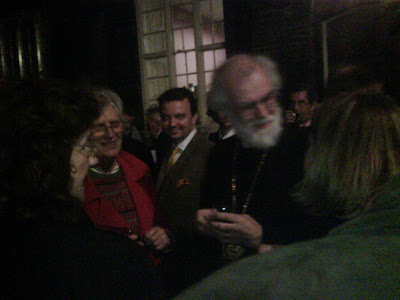 All Saints has a particularly rich musical tradition and the singing was spectacular - the lead tenor cantor is none other than ACEVO intern, Ian Lyons, who is currently working on sector policy to the Tories. And I heard him twice as the Radio 3 choral evensong was broadcast from All Saints in the afternoon (recorded on Wednesday. He has a fine voice. But then you would have working for ACEVO. He does not sing in the office - or not that I have noticed!
The sermon was especially good. Indeed I would say a masterpiece on the role of the Saints. I had a chat with the Archbishop afterwards about the tactless (my words not his ) behaviour of Pope Benedict in trying to land grab the Anglican's Catholic wing. He mentioned a poem to me which rather summed up how he felt and now I'm desperately trying to track it down. We both agreed it would be a huge blow were the Church to lose its Anglo- Catholics. Rowan is much maligned by the media. He is a wonderful cleric with a fine mind and great charm and courtesy. Good taste too as he has a house in Charlbury! And has spoken at ACEVO events twice.
Fortunately there is no chance of All Saints deserting the Church of our forefathers for the autocracy of Rome. I was baptised and confirmed an Anglican and shall die one. I have no less than four Anglican Priest forbears on my maternal side (indeed an uncle fourtimes removed who was the first Anglican Bishop of Calcutta) . My great grandfather x five, the Rev William Somerville, was removed from his Parish in Carnwath, Galloway, Scotland in 1692 by the Presbyterians after he refused to abjure his oath to his Sovereign Lord The King and so came to Ireland where his son and grandson by marriage (my forebears) were Church of Ireland Rectors in Co Cork.
On my father's side, Gloucestershire has a number of beautiful Cotswolds churches with memorials to past Bubb Parsons. So I have no intention of upsetting the ancestral vibes through apostasy.
And who said my preaching style must have been inherited? A good leadership gene methinks?