Climate change and the Financial Crisis at CHOGM. But does the Commonwealth matter?

A day in the People's Forum Assembly on the financial crisis. Debates raging between the smash the wicked capitalist system and more moderate partnership folk. But it's fascinating to hear the stories of how this global recession has affected all parts of the Commonwealth and how much people are clear on the need for reform.

The other issue that is really grabbing attention is climate change; with all the signs that Copenhagen will fail the test of decisive action. Deeply irritating to hear a news report on BBC World from the Foreign Minister of Sudan arguing that developing countries should try and "bury Copenhagen". I'm glad to say no one makes those noises here. We are all in it together as I think someone in the UK likes to say! Many Caribbean countries are particularly vulnerable to climate change and rising sea levels and they want action on climate change and a reduction in carbon emissions. And there is an obvious link between the need for socially responsible finance and business and sustainability. 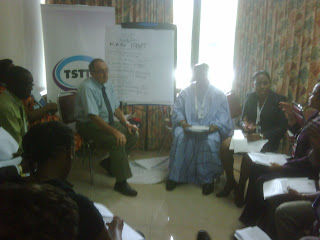 I get called out of the Assembly to do a local TV station interview on the crisis and the idea for a Commonwealth Social Investment Bank. I argue how loan finance is needed to help development. I realised I had inadvertently failed to put on a tie so rushed off to remedy this before the interview. Standards to be maintained even in the heat! And I don't want to be mistaken for my Deputy who has been known to appear full frontal media wise dishabille. It was a full on Bubb performance and all I can say is well done to the interviewer for managing some questions. You can also see me on the Commonwealth website. But that's not obligatory!

The Commonwealth Secretariat are developing a new partnership platform "CP3 " to link organisations and people around the Commonwealth and encourage mutual learning and development.

Always interesting to read local media. Main story recently was on the swine flu vaccine. They are starting a programme nationwide but the priority categories start with MPs and members of the judiciary. Imagine the outcry if that happened in the UK!

And back home it's good to see the stories in The Times today and The Guardian yesterday on the Burnham u turn on making the NHS the "preferred supplier". Click here to read it.

This is a direct contradiction of the Government's Manifesto pledge which said the third sector will be treated on equal terms. I make this point in The Times piece. And my Deputy and three other sector leaders (Jeremy Swain, Simon Blake and Stephen Burke) have written to Burnham asking him to rethink - reported in The Guardian.

This is a serious matter. We cannot afford to see the NHS turning its back on more cost effective and patient centred approaches to provision of health care. When spending is tight the NHS should be in active discussion with the third sector on how we can expand our role. End of life care, long term conditions like diabetes type 2 or dementia are areas where we can give a better citizen focused service. We have to move resources into prevention. And what matters is the quality of care not who provides it. To favour state provision over third sector is simply doing a disservice to patients and to communities. A backward step but ACEVO is working hard, previously much behind the scenes, to promote our case and ensure that the new Commissioning guidelines being written now reflect the role the sector can play.

Many members work in health and social care, whether as direct providers, as volunteers or as advocacy organisations. There is deep concern at how this may affect our ability to provide better services, and indeed expand to provide more innovative ways to treat or prevent ill health.

When William Beveridge wrote his famous '43 report which pre figured the setting up of the NHS he wrote we must not crowd out voluntary action. We have a growing role to play. It should be welcomed. A patient centred approach requires the active involvement of citizens, of patients and of our communities. Caving in to union pressure to put jobs above patients does no one any favours.

Any way! Back to Trinidad: the evening rounds off with a reception by The Royal Commonwealth Society who have been undertaking a major survey of attitudes to the Commonwealth and are releasing a report today on "Common What?". It contains the emerging findings of a Commonwealth wide study on people's attitiudes to "The Commonwealth". Click on this link for their website.

It makes disturbing reading. As it says, "this conversation has unearthed an association that seems to be loved by too few, too often for the wrong reasons. Policy makers have asked what role the association has in today's world......members of the public are largely unaware of what the Commonwealth is or does. "

Disturbing findings. But they ring a bell. Once The Commonwealth seemed to carry clout. Does it now? And yet this is the biggest gathering of world leaders before Copenhagen. It could carry a great clout as a grouping of developed and developing nations. It could have a voice for change. Will it?

A UK drugs company have launched an investigation into 170,000 swine flu
vaccines that caused patients to suffer side effects.