Our Annual conference being held today is always one of the great events in the third sector calender. This year a galaxy of politicians; Tessa Jowell MP and her oppo Francis Maude MP. Hilary Armstrong MP and Patrick Diamond - the guy in No: 10 writing the Labour Party Manifesto. So a good chance to hear the competing visions of our future!

But often it is our sector speakers who delight. Nick Wilkie, who makes London Youth so dynamic, will be a star as always. We have Kevin Carey, who chairs RNIB and sits on the Social Investment Business as Chair of Audit. He is setting up a progressive Governance Association to fight for better governance on a manifesto that is geared to promoting professionalism. Radical ideas like advertising for Trustees! Ensuring proper appraisal and development support. Why, even paying them if that is what the charity wants. Watch out for the brickbats from the reactionaries who claim all is just wonderful in our rosy sector trustee garden. Last time I said we were complacent about governance in our sector you would have thought I had spat at granny!

But a little more attention to how accountable our governance is might be more relevant than all that media nonsense on CEO expenses - a sham story that distracted attention from proper transparency.

And we have the great Sir Ronnie Cohen - a sector hero if ever there was one. He is angry the Government have been stalling on his report on unclaimed assets. Seven years ago he proposed they should be given over to a Social Investment Bank to ramp up loans to our sector. Of course we all await developments. Perhaps the Government will force the Banks to hand over the unclaimed assets that are lying there waiting. Of course the banks don't want to hand them over. So let's see if our Chancellor is prepared to be decisive and force them. A better use of their profits than paying themselves bonuses don't you think?

I started off with an introductory speech on what the future has in store. I began in good preaching fashion by a biblical quote.

The time of plenty will be entirely forgotten, because the famine which follows will be so terrible."

It is now clear the good years of public spending growth are over. So we must prepare for more austere times. A famine of grants. Spending Cuts. But times that may also offer opportunities. What will be our response?

So I launched 'The Big Ask', an ACEVO campaign on the need for third sector leaders to be heard and supported in what will be a crucial year for the sector.

The third sector is at a crucial moment in its history. The 'nice decade' of growing public funding and generous Government capacity-building is coming to a close, and a new era of public sector cuts and smarter capacity-building beckons. A decade of economic prosperity, low unemployment and relative social cohesion has been threatened by a recession still not over, whose social consequences look set to continue for years - consequences the third sector will be called upon to combat. And the most important General Election for a generation heralds significant political change and public sector reform.

It is vital that the voice of the third sector Chief Executive is heard. Where should the cuts fall? How should reform be carried out? How should the capacity of our communities and third sector organisations be built? How do we combat the social consequences of this recession? What should the priorities of the next Government be?

That is why ACEVO is launching 'The Big Ask’; to open the debate and start the dialogue we need to have between third sector leaders, their representatives, supporters and policy-makers. Over the coming months, myself and my Chair and Vice Chair will be holding a series of ten regional Forums with members, to get the members views. We will then feed those into the political parties.

And tonight I have my Birthday Party at "Clinks". Celebrating my 57th year. I suspect the coincidence of my birth on the day we celebrate the gunpowder plot may partly explain my sometimes desire to upset apple carts. Though not being a Papist I have no desire to blow up our glorious Monarch or our Parliamentarians !

My brother is in charge of the fireworks. Some serious business in the rocket Department I can tell you. So I trust the prisoners on the top wing will get a good view; though I have encouraged Nick not to actually aim them at the Prison.

Good job I have tomorrow off I suspect!

And to amuse here is a photo of me aged 1 year old. What a cutie eh! And dig the cool jumper; Granny knitted naturally! 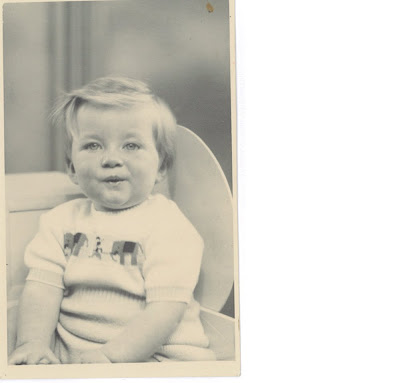 I do have one of those embarrassing "sans clothes" baby photos but thought it was just too exciting for public viewing, and these days may get me linked into some websites that are not necessarily third sector key viewing!