A three hour trek round the craggy shore of Loch Muick is a treat the weary , care worn CEO needs! The Loch stands at the cap of the Glen Muick under the shadow of the dark Lochnagar. It has been snowing but the sun was out and the skies blue. We lunched at the bothy that was built by Queen Victoria as a retreat after Prince Albert died. Glas all Sheilt is a picturesque spot , as you see: 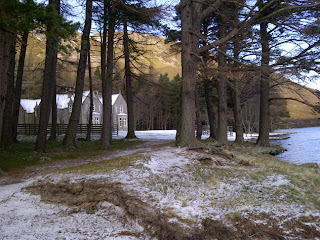 And clearly the Hound has discovered Scottish roots , see MacSparkles resplendent in her MacSparkle hunting tartan. 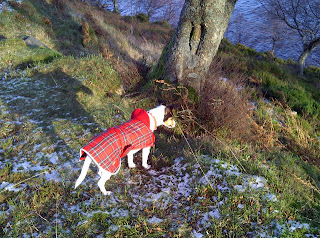 My own date back somewhat to my many times great grandfather , the Rev Thomas Somerville , who was evicted from his Anglican Church in Carnwath in 1692 by the wretched Presbies and fled with his family to West Cork , Ireland ( where they rarely have snow it has to be said!)
I'm far too old to climb Lochnagar , famed as it is by the poet Byron ( not Shelley !). He wrote,

" Away,ye gay landscapes,ye gardens of roses !
In you let the minions of luxury rove;
Restore me the rocks,where the snowflake reposes,
Though still they are sacred to freedom and love;
Yet, Caledonia beloved are thy mountains,
Round their white summits though elements war;
Though cataracts foam 'stead of smooth flowing
fountains,
I sigh for the valley of dark Lochnagar. " 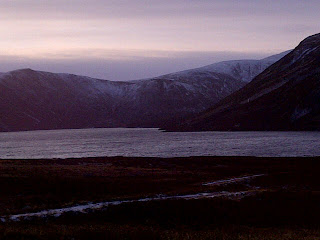