I've donned my Euclid hat ( it's European so lots of gold braid) and arrived in Naples for the Euclid AGM, our international innovation conference and competition. 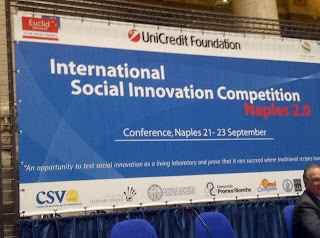 Since Euclid ( the European third sector leaders body ) was established in 2007 by the 3 founders in the UK, France and Sweden, we have come a long way. Now established as a key influencer in Brussels on financial matters relating to civil society; it has been particularly effective in arguing for social investment support for civil society.

On Nov 18 th Commissioner Barnier and 2 of his Commissioner colleagues will hold a conference in Brussels and we expect an announcement of a new initiative on social enterprise and innovation . I have blogged previously about the work we have done as part of this process in Krakov.

It is clear that the EU are learning lessons from what has been happening in the UK , especially from the examples of the social investment business and the Big Society Bank. They have discovered social enterprise and innovation! How far this goes beyond a mere buzz phrase into real support for the sector will tested in actions.

With the support of the EU and various partners we have organised a social innovation competition to take place at the same time as our annual meeting. As one of the judges I helped sort 12 finalists who will make presentations to the judges panel tomorrow.

The conference is taking place in the rather grand Chamber of Commerce in Naples; once the home of the Stock Exchange. Photos here show the scale. 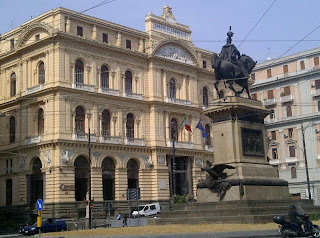 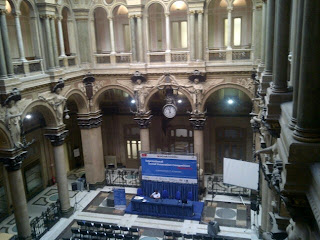 We have had the usual plethora of officials and the Mayor , but prominent among them was Mercedes Bresso, the President of the EU Committee on the regions which demonstrates that the EU may be moving to complement their grant programmes with social loans through a social investment fund for europe. Who knows?

I'm speaking on the lessons learnt from the 300 investees of the futurebuilders programme. Its an impressive record- considering the rules were that applications had to be " unbankable" our default rate at less than 5% is impressive. But it demonstrates that this is a sector that has for too long been excluded from the loan finance sector. The lesson across Europe as well as the UK is that as well as access to social finance we need to break into the mainstream venture capital market. an initiative from the EU could help in this march to a growing civil society.