I have donned my Social Investment Business Chair's hat and made the opening speech at the " Active Europe" conference organised in Krakov by the European Federation of Ethical and Alternative Banks.

But the main purpose of this 2 day conference is consulting on the submission that is to be made to Commissioner Barnier in response to the call for ideas on social innovation and social enterprise. Euclid and SIB have been leading this work but FEBEA are crucial in getting wider buy in. The consultation ends on the 14th and the proposed actions will be announced in Brussels on November 18.

It is a mark of how cut off we are in the UK that this important initiative has been almost completely overlooked. It is only SIB and Euclid that have taken up the baton and are ensuring a radical response.

And yet the UK leads the field in innovative ideas for capitalising the third sector-there is huge interest in what we are doing and so John Low of CAF and Nick O'Donuhue Of BSC are here as well.

Our idea- which I outlined in the opening plenary- is for a european wide " social investment bank" modelled on the UK idea of Big society Capital ( BSC ). This might be an institution , but preferably a fund which operates a bit like BSC and is a wholesaler- giving loan funds to partner organisations across the EU.

I was sitting next to the EU Commission representative at the opening and so asked him what the total EU budget was. He said EU 867 billion so I suggested just 1% of that as the starter fund, so 8.7bn. This would then be supplemented by the mainstream banks around the EU in the same way as with BSC.

There will be more news on this at the euclid AGM in naples shortly when we will also be announcing the results of the EU social innovation competition which the Commission is sponsoring.

I made 2 points in my opening address. The EU faces 2 crises- the obvious economic and financial one , but that is couple with a crisis of confidence in the institutions of the state. There is a growing alienation of citizens and communities from governments and state bodies.

So the response to both these problems to return power to communities and the social economy-third sector. That is the way to drive more responsive public services and empower communities.

Getting to Krakov is not as easy as you might think. There is only an easyjet flight direct. This leaves at 6am so I refused to contenance getting up that early. So I had the bright idea of flying to Warsaw and getting the train. Supposedly it takes 2.5 hours. But in fact it took 5.5. And my image of flying through the Polish countryside whilst taking a leisurely dinner in dining car were crushed when I discovered train had no food of any description- though a man appeared half way through the journey with a large rucksack full of cans of beer! Well, needs must. Still I guess I saved the airmiles?!

At least I had a few hours to look round Warsaw; a rather more attractive City than its reputation would have you believe. It was almost totally destroyed by the Nazis but has been painstakingly restored.

I went to see chopin's heart and the birthplace of Marie Curie. 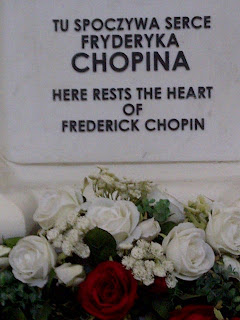 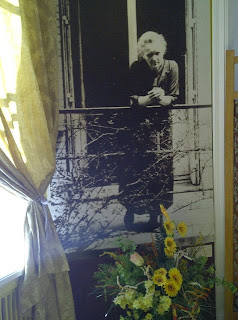 A reminder of the scale of the German Nazi atrocities was brought home when I went into the Dominican Church near Marie Curie's. During the Warsaw Uprising the church was used as a hospital. When the Germans marched in they shot the entire nursing and doctor staff, then they blew up the Church , thus burying all the patients who were in beds in the crypt. It was impossible to disinter all the bodies after the war so the marble Church floor now marks the grave of those hundred poor souls.

Krakov itself is a marvellous city- now well known as the birthplace of John Paul and where he spent his years as Cardinal Archbishop. 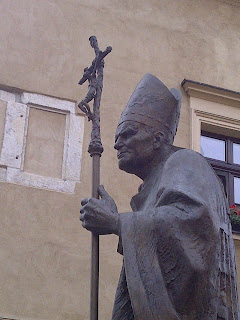 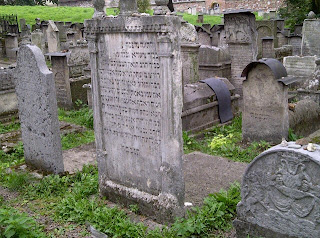