So its farewell Liverpool. A stunning city; all the more beautiful when its bathed in glorious sun. I had a few hours before the train and as the Roman Catholic Cathedral was just around the corner from my hotel I went to visit this remarkable modern Architectural gem designed by Gibberd.

But the plan was to build something much more grand. Lutyens had designed what was to be the worlds largest Cathedral. If built it would have dwarfed the Anglican cathedral being built along Hope St. The Lutyens crypt however is complete and shows just how massive this Cathedral would have been. 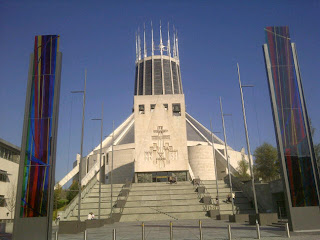 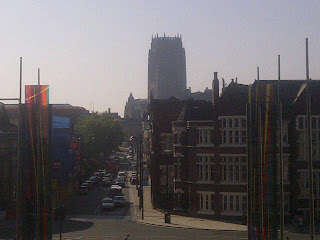 Liverpool Anglican Cathedral as seen from the RC one
Liverpool has always been home to a huge population of Irish; whether Catholic or Protestant and sectarianism was rife in the past (hence the 2 rival football teams as also in Glasgow).

I have my own links with Liverpool. My Limrick ancestors have a vault in the Church at Crosby for back in the late 18th century Thomas Limrick, my great great great grandfather's brother came here as a Doctor. 4 generations of his descendants are interred in Crosby. They were Anglo Irish, like their cousins the Chavasses and it was Bishop Chavasse, 2nd Bishop of Liverpool, who was responsible for the Anglican Cathedral, as well as founding St Peter's College, Oxford. 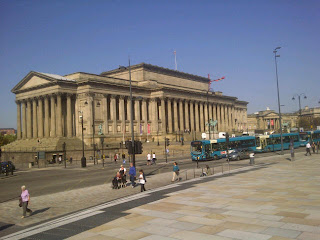 St George's Hall from Lime st station
At the conferences I have been talking about the power of social investment. I think that we have yet to develop a strong alliance of those porganisations in our sector who are developing this new market. I know that our new CEO at SIB wants to do just that. So good to see that headhunter extrodinaire David Fielding (www.attenti.co.uk/) is searching for someone to replace John Kingston to run CAF Venturesome, having just found Jonathan Jenkins for SIB.

They will report to that sector guru and fixer John Low (my ex Chair at ACEVO). I have always been impressed with Venturesom; it has a great reputation and been a key player in this emerging market in the early days when many in the sector were anti loans. I suspect this will be a very attractive role and given all the recent development within Social Investment, it’s superb timing for someone to come in.

We really do need to grow the strength and depth of this market.

Now I'm on a train to Manchester. I'm speaking at the ACEVO North Conference. I'm warning that the cuts our sector face from local councils next year will be worse than this year. We must not be fooled into thinking that the cuts have happened and we can relax. The local government chronicle have shown that the majority of councils they surveyed (65%) expect to make bigger cuts this year. The cuts have severley damaged our sector. Our recent acevo pay survey showed that 41% of members have had to make redundancies. So expect more next year. 32% have had to reduce service levels. So expect more next year.

We need more transparency from councils on what they spend on the sector and how budget cuts affect us, as compared with other service provision. I have written to Greg Clark to ask for this, which he has promised, to happen quickly so it is in place for the council budget round.

But most of all we need to see councils looking at the sector as part of the solution, not part of their budget problem.

You can read the full speech here.
http://www.acevo.org.uk/page.aspx?pid=2616

Hi Stephen, we'd be very interested to talk further about the work we're doing to build the social investment market. As you probably know, our charitable bonds allow charities that aren't able to take on financial liability themselves to still benefit from accessing a new source of funding through social investment. We're also working on a new range of products to open up social investment to a retail market.

There's more at www.allia.org.uk and you can download a new review of our charitable bonds by New Philanthropy Capital here.

Please feel free to get in touch if you'd like to talk further.

Hello Stephen,
Just a quick note to point something out which isn't quite correct In your blog post about the Liverpool visit. You infer that there is a historical sectarian divide between the two football clubs similar in its roots to that of the two Glasgow Football Clubs. I'm afraid to tell you this is complete nonesense. Everton FC was formed first and was established by a Methodist Church Minister and due to an internal board conflict a few years later in the 19th Century board members broke away to form Liverpool FC. Although Everton has historically had a large following from local Catholics, religious denomination was never really a factor in choosing who to support. As a former Catholic school pupil from the Merseyside area half the kids supported one team and half the other!