Not going to bed till 2 is not to be recommended. Especially when one is getting older. Though lots of deals, contacts and networking. Its the essence of what a third sector leader needs to do. Pushing the cause. Getting ideas. People who share your ideals and can help you in pushing your organisation. Though whether this is a healthy way to do it must be questioned. I do at least remember the golden rule; don't drink too much. And given that most of what gets served at fringe meetings is not that appetising that works for me!

I'm now at a pause; sitting in the late evening sun. By Albert dock- Liverpool is a brilliant city and the glories of our once omnipresent Empire are all around.

I was up early (far too frankly) to speak to the Leader of Liverpool City Council. The Social Investment Business has invested over £11.5m in 47 projects around Liverpool. We have generated extra funding through our loans and had a significant social impact. So we want to work more closely with the City council. I was impressed by Cllr Joe Anderson. He completely got the point of us working together to build more infrastructure and service delivery by the third sector.

We are to have a further more detailed meeting to see how we leverage funds by partnership working. It huely inmportant that we develop better relationships between councils and the sector. More cuts are on the way. Getting council Leaders to understand that they can work with the sector to deliver more effective community based services is key.

Its a message I share with Caroline Flint MP who is the shadow local government minister at a meeting after.

And I develop this at the RSA- Social Investment Business fringe meeting. Matthew Taylor is superb. He made the point that what Labour missed, and the Tories may be too, is that public service reform is not about better management. Its not, as he put it, "new public management". It is about socialising public services. Reconnecting them to people. It is about helping society solve their problems, not solving them for them.

This is absolutely right. Its what governments have missed. It is core to the third sector message. We deliver better connected services. We do that because we are not new managerialists but have developed our services to meet what beneficiaries want, not what we think they should have.

It is our time to deliver more. But does labour get this? Seems only half heartedly.

Listening to Ed's speech I like it when he said, "Take on the vested interests for the public interest.".

Yes Ed. And that means the vested interests in the health service and in public services generally.

I see Ed later at the gala dinner. SERCO have asked me to join their table with various council leaders. And amusingly it turns out that the Leader of Enfield council was one of the founding members of Acevo. I told him next year we will celebrate or silver jubilee and we will invite him to our big celebration.

Ed gives a speech which I think is much better than his set piece. Its unscritped. Delivered without those long pauses and 3 word sentences. When he does this he comes across as a really warm and committed guy. This image has still not made it to the public. It will. 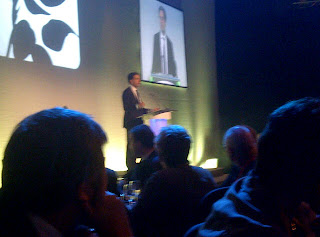 Then on to Co-op reception. More dancing. I discover there is a video clip of me doing the twist. I take out an injunction to prevent it getting on You Tube!

And in between times I was doing media interviews on the "health lottery", calling on Desmond to up his giving to charities to 28p. I hammer the message home on BBC breakfast, on ITN and regional shows. I also discover the Indi on Sunday had named my blog as one of the top blogs to read- though they got my picture mixed up with someone else! And one of the news reports quotes from my blog on the lottery. The power of the Blog!!

Anyway , let me leave you with another rather lovely picture of Ed paying tribute to Blog author.... 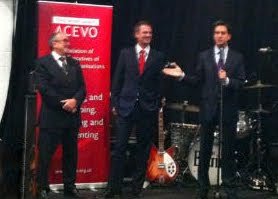 Finally, its been good doing joint work with ncvo. The joint fringes have been going well and we are now planning our joint conference on localism. It will be in Birmingham on December 9th. The Government's Big Society agenda has signalled the end of centralised, top-down decision making. Or has it? A new era of localism has been signalled, with an emphasis on empowered and engaged citizens, local decision-making and accountability. That's the policy: but what's the reality?

Knowing how to benefit from the opportunities created by this agenda is crucial for us to grow against viscous cuts.

Expect more joint events from us and ncvo. A new era of cooperation and detente. But you may have to wait for videos of me and Stuart doing the twist...