The government launched their White Paper on Open Public Services yesterday. I spoke at the launch with John Cridland of the CBI in support of the principles of reform together with the PM. 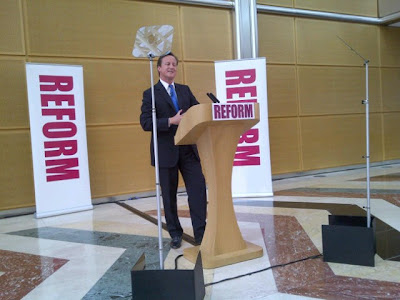 I said that the PM probably did not know , but some 5 years previously , John and I had spoken at another event with the then PM Tony Blair when he was making a major speech on public services ( with the newly appointed Ed Miliband in the audience! )

I was making the point that reform is a journey, and their are major vested interests along the way who want to frustrate reform. To much amusement I used a rather apposite quote from Machiavelli.

I had been told to keep my remarks to a strict 3 minutes. It's a good limit. This forces you to be absolutely clear and focussed. To make your points succinctly. It is a great discipline. And it certainly stopped me waffling.

The speech by Cameron was an excellent exposition of the need for reform. He could not have been clearer on the role of our sector, on the barriers we face and the potential for growth.

Cameron sketched out his vision for reform of the public sector arguing that the “old-fashioned, top down, take what you’re given” culture has to be overhauled.

“Let me tell you what change looks like,” he said in his speech in London. “It’s about ending the old big government, top down way of running public services ... releasing the grip of state control and putting power into people’s hands. The old dogma that Whitehall knows best – it’s gone. There will be more freedom, more choice and more local control.”

It was good to hear the prime minister give his reassurance that new entrants from our sector will be competing on a level playing field with incumbent providers and will consult on whether an independent monitoring system should be set up in various sectors to reinforce that.

Cameron promised to see through the changes. “I know there are those who thought we might be pulling back or losing heart ... so let me assure you of this: we are as committed to modernising our public services as we have ever been. I am not going to make the mistakes of my predecessors ... blocking reform, wasting opportunities and wasting time,” he said.

I think my own speech- a strictly time limited 3 minutes- went down OK and it was certainly name checked by the PM on 3 occasions, though I note I have become " Steve".

He commented on the opening up of services to a diversity of providers. He said that this was not a threat to essential services but " promise of better services for everyone ". This is very much core to ACEVO's belief that a greater role for the third sector will provide more citizen and community focused services.

More detail on the White paper is on the ACEVO website.

I suggested we now need to build a coalition of support for reform over the next few months of the " listening exercise" which lasts to September. We will be working on that and we will be consulting ACEVO members and others in the sector on the White Paper. Departments will publish their plans to implement reform in November so we must ensure those plans have a clear focus on how we can give more power and choice to citizens and communities.

Of course the questions to the PM were on another subject altogether! It was all rather dramatic as you could see notes being passed to the press there with the latest revelations on HM and on Gordon. All quite appalling. So I doubt there will be great media on public service reform this week. Still, it's useful briefing for me as I am on "Any Questions" this week !