An amazing launch of " the Right Time, Right Support" campaign at the Royal Festival Hall this morning . Joyce Moseley, in her last week as the dynamic and effective CEO of Catch 22 made a splash. And we even had HRH The Princess Royal there to get the campaign off to a great start.

As Joyce pointed out ; in their evaluated projects( which work to support young people in their families and communities and prevent admission to care) they save the State £10 for every £1 they spend. 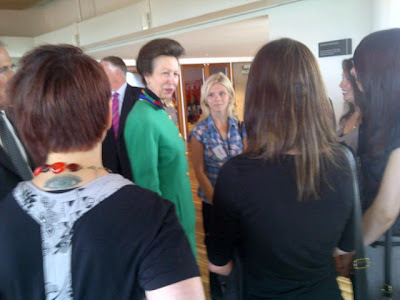 The Princess Royal is Patron of Catch 22 and we all know in the sector she takes her role as a charity champion very seriously. 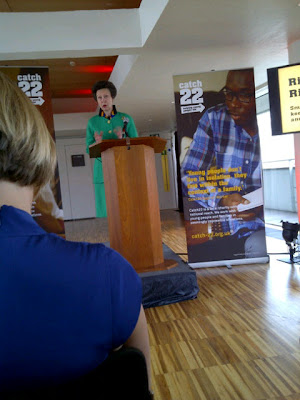 As well as launching the new campaign and urging support for the fundraising campaign she spoke about the funding challenges of the sector and how important it is for sector organisations to work together and for us to remain on mission and prepared to do what they think they need to not what a funder says they should to get money.

Had an amusing chat afterwards and discovered she reads " Third Sector" and so I suggested she occasionally reads my wise words. She grinned!

We heard from a number of the beneficiaries of the work of this great charity. One point struck home. A mother said that when they first had a visit from the Catch 22 staff member , unlike the usual social service worker , they arrived minus briefcase, pen or paper. They just chatted. This is exactly the sort of flexible non bureaucratic way our sector operates. Long may it continue.

And good luck Catch 22 under its new CEO and congratulations to Joyce on a stunning career which has pushed the boundaries and advanced our sector.

thats mee thats mee.... with the terrible tattoo.... should have checked that wasnt on show beforehand

was an amazing day and experience thanks for writing about it so soon!