Tony Blair was without doubt a great PM. Just how good , I was reminded at an event for the Blair faith foundation at the British Museum on Tuesday night. 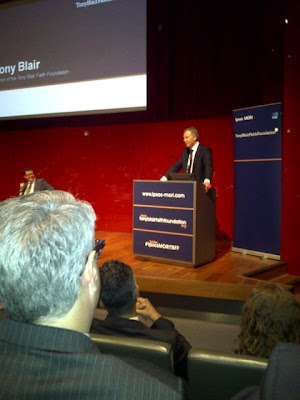 A discussion lead by Ben Page at MORI with Tony as the main speaker. He was on top form. The audience just lapped him up.

Ben reported on an Ipos- Mori survey which shows that 75% have a faith or belief. Tony took that up in his remarks about how we cannot ignore the faith dimension in solving political disputes.

Tony's theme was " religion matters". You cannot understand the modern world if you don't understand faith. He is right and the role of faith is hugely underrated in national discourse. It remains one of those issues we should not really talk about. Yet faith matters hugely in our third sector.ACEVO membership has many members amongst faith groups and charities that have a Christian , Jewish or Muslim background.

I asked Tony a question about faith and charities; I remarked that if politicians don't do God the third sector certainly does. In response he recounted the story of how he wanted to end one of his broadcasts with "God bless Britain", much in the way US Presidents do. This caused a major upheaval in No 10 amongst advisors and in the end he gave in and did not do it!

After some rather splendid networking I was able to pop into the Commons for the final knockings of the annual parliamentary voluntary sector reception. A most pleasant place to be- on the terrace at the Commons on a balmy summer evening.

Couldn't agree more. Was writing about this 4 years ago http://www.ncvo-vol.org.uk/sites/default/files/UploadedFiles/NCVO/Publications/Publications_Catalogue/Sector_Research/NCVO_faithincommunities_pdf_0.pdf