I have spent the week head burrowed in papers; Sun , Mirror, Express...the lot. And listening assiduously to Newsnight and Today. Getting briefings from the team on the euro and unemployment. The latest on the Evil Empire (Murdoch et al).

For I was to appear on that wonderful BBC Radio 4 programme Any Questions tonight. In Coventry. But alas they phone me last night to say there is an NUJ strike so the programme will not go out today. So the British public are to be denied the pleasure of Bubb's views! And I was so looking forward to it!

Still , never mind I am to be rescheduled!

It meant for example that I only sipped my glass of rather flat bubbly at the Respublica summer launch last night. Wanted to be on my most alert for the public!

Philip Blond, the irrepresible force of nature was on top form. A little too top for us standing around listening it must be said. We also had Lord David Freud and Greg Clarke MP, both on form extolling the virtues of citizen and sector power in service delivery. 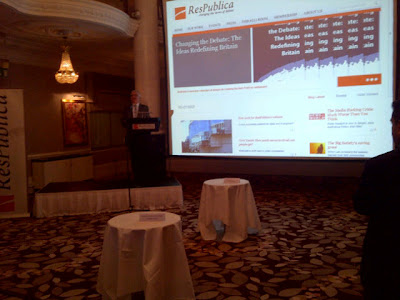 You can just see David Freud speaking!
Greg had earlier met with Lord Rennard, Ralph Michell and members of the Big Society Commission to talk about the report. Greg was enthusiastic. Believed it offered a good way forward. I had preciously spoken to the Bishop of London (a member of the Commission) on it and he thought the Government response was good.

Finally, talking about the Bishop he gave a tremendous sermon at my Vow taking and I wanted to use a particulary brilliant and beautiful quote from that. He was quoting from the Chief Rabbi who was speaking on the 400th Anniversary of the Commissioning of the King James Bible.

"The texts a culture teaches its children shape their landscape of literacy, their horizons of aspiration. People who can quote the Bible walk tall. They carry with them a treasure no one can take away from them. They sing with the tongues of poets, walk with the wisdom of Solomon, find solace in the soul-music of the Psalms, and hope in the blazing visions of the prophets. In an age of blogs and twitters, the King James translation remains the Beethoven of the soul, the imperishable music of spiritual grandeur"

Surely not thinking of my Blog!