On Sunday I was doing a Queen Mary! Every year, in May, Queen Mary would visit the glorious American garden in Dulwich Park to see the stunning rhodedendrons. And yesterday I did the same; the Hound and I entering the park through Queen Mary Gate! Here are the views: 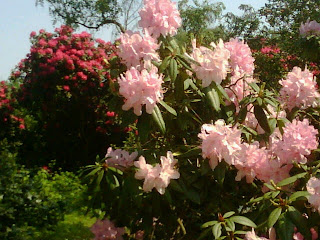 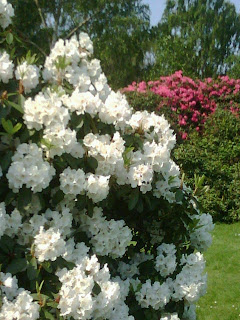 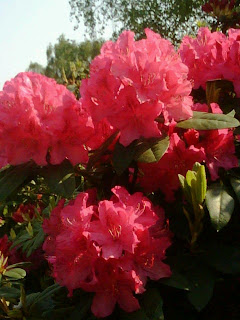 And as I viewed the gardens I was talking to a Doctor ( as I seem to do frequently these days! ). Steven Laitner is a GP and clinical advisor to the DH. He is a strong advocate of a radical new approach to long term conditions, much along the lines I have been advocating so we had a good chat. We both agreed we have to move away from a medical model of tackling the growing problem of long term conditions.

He has sent me a paper he developed for the East of England strategic health authority. It advocates what it describes as " integrating Pathway Hubs ". Essentially the hub would be the prime vendor for the provision of health and care services needed for say, people with diabetes. It would gather together a range of contractors across the third sector, the private sector , doctors and hospitals but with the emphasis on health and care largely controlled by the individual and in the community.

Later on I get a fascinating note from one of the members of my choice and competition panel , Anthony Mckeever , Bexley Care Trust. I think the point he makes is worth repeating here;

" You suggest that "Long term conditions take 75% of the NHS budget". I know just what you mean - and I think it is a fundamentally important point. But it is actually worse than that. The lion's share of every commissioner's budget actually goes on acute services (though it shouldn't). This is because the system behaves perversely locking itself into spending on institutions rather than services. Figures show that - despite policies intended to shift resources to primary and community care settings - the proportion of total NHS spending on acute services has consistently increased under successive Governments.....

They undertook an analysis of Bexley residents in terms of health spend and,

Astonishing! No wonder we need to move to prevention and a citizen centred approach to health management.

Sunday ends with a teleconference call with the 5 of us panel chairs. We have become a jolly bunch - united in adversity! We reflect on the latest political musings; its clear we are handling one hot potato. But we are optimistic we can come up with a report that helps move the debate forward.

Yesterday was also the Sunday set aside to remember the Martyrs of the English reformation. I said Mass for the repose of the soul of my ancestor Sir Edward Neville who was beheaded by Henry V111 for his adherence to the faith; my Great Grandfather x13 he was the last of my ancestors to be knighted. I also have another ancestor , the Rev Thomas Somerville ( descended from Edward ) who was evicted from his living for refusing to swear allegiance to the Hanoverians as he had sworn his oath to the Stewart James 11. A pesky lot eh!

I like to think an anti establishment gene runs deep in the Bubb DNA. It probably accounts for my reaction to all the helpful notes I get from civil servants with "templates" , "formats" and , would you believe. " a protocol for blogs"( you can tell where that one went can't you! ) ! Mind you, I can't blame them. My staff have tried similar in the past ! We shall see when I produce the report on choice and competition. I've written the opening paragraphs. As for the rest we will see what emerges from my Panel discussion when we get together on the football pitch. The opening is good...just not sure what the end looks like yet!