I grabbed my Euclid Secretary - General hat and fled for Heathrow! Asidious readers of the Blog will recall I'm doing a work shadow exchange with a top Serbian ngo leader Biljana Dakic-Djordjevic spent a week with me in London trailing around Whitehall etc. I was supposed to do a week of shadowing her but I'm afraid the Health work intervened. But I was determined to fulfil at least part of my obligation and so I'm here, blogging from Belgrade.

Arriving late I was wisked off to a stunning resyteraunt in central Belgrade- sititng under the plane trees and listening to the violinist it was easy to see why " mittel europe " is so charming. A fine dinner and excellent Serbian white wine from the Royal estates. So relaxing to talk about things other than health; war crimes, human rights , peace ands such like.

But obviously I can't escape completely and I do changes to the report on the plane following lots of emails from my colleague panel members. The plane journey proves most fruitful.

So first thing its off to see Milan Markovic, The Minster of local government, human and minority rights- oh and he also has responsibility in thre south of Serbia handling many issues around Albanian and Serb relations. A young, dynamic guy who is clearly influential in Governmnt. He also had a hand in framing the new law on civil society and we talked about the newly established Government Office of civil society.

It was then off to see Grupa 484, set up in 1995 originally to support refugees fleeing from war in Croatia. There were 484 families who were the original people supported. Now much extended , the also do research and work with Government on refugee and migrant policy. A great organisation- set up as a visionary idea by a famous prima ballerina and peace activist Jalana Santic. Its a marvellous example of the power of our sector to achieve change.

So now I'm at this lovely restaurant in a small tree lined courtyard in Old town Belgrade withMiljenko Derta, the Director of Civic Initiatives and Miodrag Shrestha. We are relaxing in the sun. See us here. 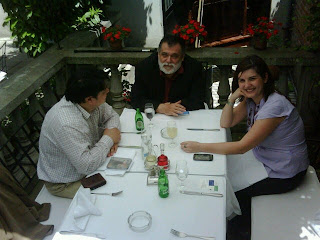