Cameron is right. Ed Miliband is right. We need to " change and modernise the NHS...to make it more efficient and effective and, above all , more focused on prevention, on health not just sickness. We save the NHS by changing it ". ( PM today ).

Could not agree more. It will be the core theme of the Report I'm now working on with my Panel on choice and competition. I'm beginning to see some consensus emerging.

As my old friend Jill Dixon , CEO of the Nuffield Foundation said this morning on Today we need competition but also cooperation. And Stephen Dorrell MP , writing in the Times says one of the crucial issues facing us is how to merge health and social care.

I'm pleased we seem to be getting agreement around the need to focus on the issue of long term conditions and the ageing population. A new approach is needed. Not based on a medical model n but on integrated care, focused around the individual and with a major role being played by the third sector.

A conference call with my colleague Chairs on the Future Forum at 9 pm last night! We agree that we will be able to produce Reports that move this debate forward and will make recommendations for change that will both improve th Health Bill and point the future direction for health and social care.

Having spent most of the weekend drafting, and re drafting, swapping points and wording with my colleague Panel members my head is spinning. But I can see the key points emerging. We will say competition is important. But we will also say the perception of privatisation has to be tackled by changes to the Bill. And we will argue strong for commissioning that promotes diversity of providers, like our third sector , cooperation across providers wherever they are , and integrated care packages. And all this focused on choice and citizen empowerment.

And now I'm blogging from Church House where we have the launch of the Rennard Bigsoc Commission. A gathering of the great and the good from sector and beyond. 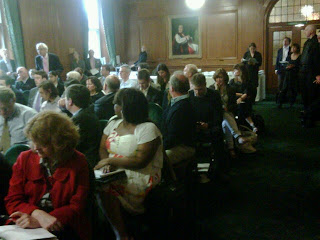 A rather excellent report in the Indi on Sunday gives a good summary of it and so I reproduce it here.

" A hard-hitting report into the scheme by an independent cross-party commission will say that the Government's enthusiasm for it risks being undermined by "over-rapid and poorly managed public spending cuts" to the voluntary sector, particularly in low-income areas.

And a YouGov poll carried out for the commission, chaired by the Liberal Democrat peer Lord Rennard, found that 78 per cent of the public believe the PM and Government have failed to articulate what the term actually means.

The report says this failure to tell a "sufficiently compelling narrative" has "fuelled high levels of cynicism" about the motives behind it at a time of swingeing public spending cuts.

Because of this vagueness, the agenda risks being used by Whitehall and local authorities as a "cover for cuts", the authors argue. The commission panel includes Mr Cameron's former policy adviser turned Conservative MP, Nick Boles, as well as the Bishop of London, the Rt Rev Richard Chartres, and charity chiefs.

A separate ComRes poll for The Independent on Sunday shows that in fact fewer people understand what the term "Big Society" means now than three months ago: 40 per cent admit they could not grasp the concept, compared with 30 per cent in February.

Mr Cameron launched his vision for the Big Society, the brainchild of his strategy chief Steve Hilton, in November 2009. After becoming Prime Minister a year ago, he said his government's reform agenda would have the Big Society at its heart.

But since then, some cabinet ministers have been indifferent to the project, with the Liberal Democrats under Nick Clegg virtually disowning the notion altogether.

To revitalise the idea, Mr Cameron will publish the Giving White Paper, designed to boost charitable donations, at the same time as meeting social enterprise award winners, selected by the Big Society Network, at an event in Downing Street a week tomorrow. The event is being held on the eve of the US President's visit. Mr Hilton's original idea was inspired by President Obama's own community volunteer programme, and Downing Street hopes that their visitor will see echoes of his own scheme.

Critics have warned that, while the Big Society "brand" has fuelled a flurry of innovative social enterprises, it masks the closure of, and cuts to, less glamorous voluntary schemes that rely on local government grants.

The commission's report says the growth of the Big Society should not be matched by a reduction in the size of the state, or moves by the Government to "abdicate its responsibilities, particularly with regard to the most vulnerable". Voluntary sector grants from local authorities are down 56 per cent year on year in some areas, which "contravenes the objectives of the Big Society", the report warns.

It highlights the inverse relationship between volunteering rates and levels of deprivation, with graduates twice as likely to volunteer as those with no qualifications.

It warns: "Not only does community capacity to deliver the Big Society vary, the variation is likely to be exacerbated by cuts. The capacity of individuals to contribute to their communities is likely to be more dependent on the state supporting them to do so." 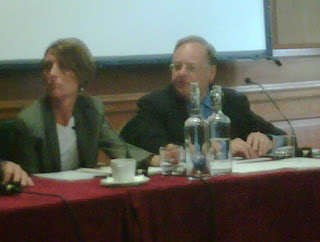 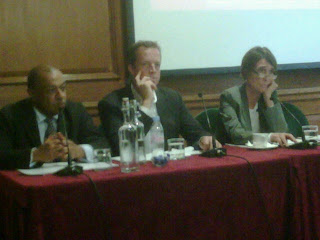 Dame Clare Tickell was superb. Talking about the role of Action for Children , formed in 1869 , she said they have often has to " step in , where the State has stepped out". She warned that it is the most vulnerable and the most deprived areas that have the lowest levels of volunteering and is suffering most from cuts. She said attacks from government supporters on big charities risk alienating the very people they need to support them.

Nick Boles , the conservative MP said local councils and key prime contractors must accept their duty to deliver effective services and Government must set boundaries. They must set a high expectation they use the third sector more.