The Pub Quiz... and the cuts puzzle 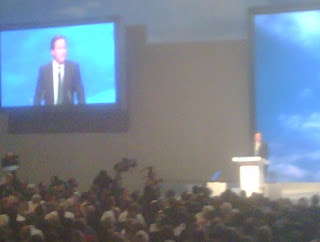 I am afraid to report the combined might of the ACEVO team failed to carry off the prize at last night's pub quiz! I guess all those odd questions on sport and popular culture? So the case of champagne goes elsewhere! But at least the Barnadoes team fared equally as poorly so we weren't shown up by a member! The event was "chaired" by my old mate from local government days, Eric Pickles. I saw him later " how are you comrade" was his warm greeting!

I tried to get into the Conference hall this morning as my vice chair on futurebuilders was speaking, Harriet Baldwin. She is soon to be MP for Worcs West.But all the seats were taken so had to watch on screen insteed. She told me later that just before she spoke she had managed to tip coffee all over her jacket! But the "frighteningly efficient "(Sunday Times) Harriet made a strikingly effective contribution!

Then listened to George Osborne MP ( on the screen at the BBC stand- which seemed sufficiently ironic) He pledged a major reform of public services: " Decent public services" - reversing the dramatic fall in public service productivity, getting more for less. The reform of services will be driven by those who use them.

Went to a WWF reception (excellent ACEVO member) at lunchtime , just before the sustainability debate where they announced a major campaign on retro fitting across the country. Greg Clarke MP , the Tory Environment spokesman , asked me whether I was still blogging...and was that other chap too? I assured him we both were and he promised to visit! Greg continues to be an impressive speaker and thinker and spoke enthusiastically about proposals for a Tory sustainability programme , where third sector organisations will play an important role in delivery and advocacy.

He was followed by the equally impressive Nick Herbert MP . " You cannot live beyond your sustainable needs" was his message and he argued we must move from a negative agenda to a more positive one- involving TSOs , people , businesses in promoting a green Britain. He urged us all to help him , "Keep the green flag flying above the Tory party ". I assured him later that we would certainly do that but he said he was not sure he would use the line in the actual conference hall. He said I was welcome to Blog it...I said it was already in my draft. It is such good news for ACEVO that my Blog appears to be widely read in Tory circles. But then, why wouldn't it.

But again a day where it is clear the third sector (or will I soon have to call it the social sector? ) is seen as central to delivery. The issue for us as a sector is how will we respond. Will we take up the challenge to think of ways we can deliver more cost efficient but better services? Are we prepared to engage in the cuts debate? Will we think how we can team up with the private sector to deliver contracts? Will we rationalise, think merger and alliance and cooperation. Tough times are ahead for our sector. But also opportunities. Its up to us to make the best of difficult times. ACEVO will work with our members to do this. Already we are talking with members about proposals to put to Government of whatever colour that helps meet national objectives of cutting debt. I talk to Nick Hurd about how we input this into emerging conservative thinking. Always best to be on the front foot. Its what a Chief Executive has to do.