All go on public service reform! 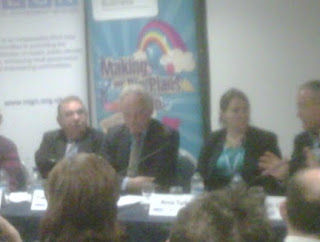 Great to hear Francis Maude MP play up the role of the third sector at the Tory Conference this morning. A very clear endorsement of the power of the sector which we can put into play in delivering services. He was enthusiastic about the private and third sectors ability to deliver better outcomes in prisons. He was keen to see more third sector people on the Departmental Boards in Whitehall.
In a fringe meeting later he argued that the need for public spending cuts will force us to think about how we provide services; and pointed out there is now a lot of work going on in think tanks about how to do this.
Acevo has been working closely with Francis on the outsourcing agenda. The Conservatives have always been clearer that reform of public services means more delivery by non state providers. Labour has always been equivocal on this and indeed we heard nothing about it at the Labour fest in Brighton.
Seeing Francis afterwards I congratulated him on an important speech and encouraged him particularly on prisons. In the Fringe meeting he also said that what often stands in the way of TSOs delivering more is finance and so we need a Social Investment bank; "an urgent priority" for the tories. He says all that is needed is for the Government to "pull its finger out". There is a growing market for social investment which they want to encourage. Excellent. And note he talks of a social investment bank- none of this wet woolly wholesale nonsense!
In the 2020 Fringe Stephen Dorrell made the point that there are 2 approaches to cuts; salami type slices of existing programmes or a fundamental review of spending overall. This is very much the approach acevo has been arguing and why we think that spending cuts are not necessarily a bad thing for our sector. A fundamental review of public services would allow many TSOs to argue for a bigger and expanded role.
Ben Page of Mori made the rather telling point that the public want Swedish style levels of public service but American style levels of tax!
Philip Blond argued that the solutions of the 80s on outsourcing are not now appropriate so there is a need for alternatives, for example employee share ownership in public services. How do we cut intelligently? The answer lies in innovation. Let employees have a stake in a spin off public service organisations and set them up like John Lewis! He also said that the TS is more productive than the public or private sectors! He argues that the TS is not only more productive than the FTSE 100 but that employees are happier in their work. Powerful stuff!
And the innovation point is rather tellingly made later; "We didn't have any money so we had to think" as the leader of Westminster Council said. He also argues the need for Job centre Plus to be tied into the local economy with local councils and health authorities. A good point.

What is already becoming clear from this Conference is that our sector will be playing a central role under any newly elected Conservative Government. Our job in acevo is to prepare our Members to take advantage of this change if it happens! And so I had a meeting with the CBI this morning to explore ways in which we can promote third sector and private sector partnerships to deliver services. Its happening in prisons and in welfare to work. It will clearly grow. Its a way to ensure effective and efficient public services that work for citizens!