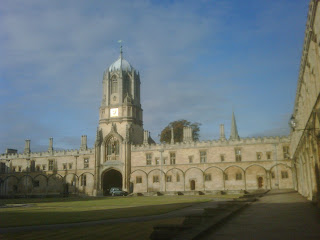 "Dream no small dreams for they have no power to move the hearts of men" Goethe. It was the quote Gordon Brown used in his speech though he mangled it somewhat. But what a fine sentiment for our own great sector. And many of our finest charities amd social enterprises have emerged from the dreams of individuals. Francis Noel-Baker who died last week was a good example. Driven by a passion for human rights and a campaigner against Governments who abused their citizens , he was one of the forces behind the founding of Amnesty International, an organisation that has done so much to alert the world to human right abuses. Many moons back I was the Secretary of the Medway Towns branch and we campaigned for prisoners in South Africa and in the Soviet Union. Kate Allen , their CEO is a long time and fine ACEVO member.

I was remembering all this last night as I sat in the magical setting of the Christ Church Hall. One of my friends reminded me I had had a fundraising party at College for the mother and sister of one of our adopted prisoners who was being held on Robben Island. It was one of many envoked memories as I joked with my colleagues from the '72 PPE course, William Ewart Gladstone glaring down at me as I eat and under the benign presence of the mighty holbein portrait of our Founder King Henry V111.

We were celebrating the retirement of the philosophy and the politics tutors, Jonathan Wright and Hugh Rice who had both taught for 40years. Lord Lawson gave a valediction. He said that philosophy had taught him to discern the nonsense in the grand speeches of politicians ! My 2 old tutors gave the most eloquent, erudite and witty speeches. Such a contrast with the fare offered up in Brighton. A joy to listen. Hugh Rice taught me Logic, or as I must be correct here, attempted to teach me Logic. Jonathan Wright I remember from my first tutorial when he gave me a long reading list that included 2 books in German ( I can't read German but no matter ).
David Willetts MP was there. Amusing to think that both he and I were taught by the same politics and economics tutors!

David is a very fine Tory. He gave a great speech at an ACEVO chief executives lunch and talked about the book he is writing on inter-generational contacts. This is now finished and it is off to the publishers. Out in February. I also gave him my take on the Labour plan for fallen women. Be interesting to see how he responds in his speech to the Tory conference on tuesday.

Other luminaries present among the 200 or so old students were Peter Jay , Neil O'Brien , the head of the Tory think tank Policy exchange ( who was reprimanded for his poor economics in his recent Newsnight interview!) Former MP now author Robert Harvey and James Robbins the BBC correspondent - also ACEVO contributor!

I was struck by some of the conversations with friends now in finance or commerce and their attitude to mergers, or," mergers and acquisitions" as they call it. Are we too delicate in our sector about this. Why should we not also be talking about aquisitions? Perhaps we need to be more aggressive on the need for rationalisation in the sector? With tough times ahead there is scope for this?

But it was interesting to just pick up the conversations of 35 years ago with old friends. College days are magical and none more so than in an institution of such venerable age and distinction. I'm afraid they have fallen on hard times as the wine was of a distinctly less good quality than I recall (my senior tutor was in charge of the wine cellar and had a good nose for a fine claret- a philisophical skill he taught me) and we even had a fundraising speech! 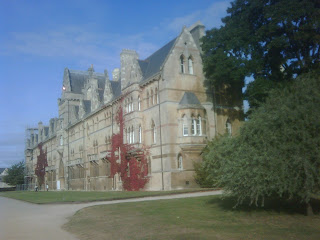 I slept on the same staircase I was on in 1974... The magnificent Victorian pile of the Meadows building, staircase 4.

But back to the real world now...

Good to see that 35 years on you're still capable of sleeping on staircases - I've always found them cold and uninviting but I guess all that food and wine helped...
Shame they couldn't find you a room.

well done for that!!

Interesting point about whether the sector is too delicate when it comes to discussing the idea of mergers.

Radio 4's The World at One programme, recently spoke to some of the UK's biggest givers about their giving and what they feel needs to change in the charity sector.

Two of the philanthropists, John Studzinski (a senior figure at Blackstone, the private equity firm) and Rory Brooks (founder of private equity firm MML Capital) both suggested that charities should be looking more seriously at the possibility of merger and acquisition. Studzinski refers specifically to the high number of homelessness charities and suggests that merger in this sector 'would not be a bad thing.'