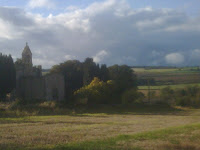 We celebrated Harvest Festival in Charlbury on Sunday. There is still a large farming community in this part of Oxfordshire and the gently rolling fields and farms define the gorgeous scenery in what David Cameron MP has described as " the most beautiful part of England".( No , that wasn't in his Conference speech but in a local leaflet he has sent out to his constituents in West Oxon! ).

The Hound and I were out enjoying long walks in the fields around Ditchley ( though I needed some skill in persuading Sparkles not to practise sheep herding at one stage).

An interesting account of "zakat" in the Parish newsletter was an interesting counterpoint to a deeply fruitless meeting last week at HMT on Gift Aid. Zakat , or alms giving, is the 3rd pillar of Islam and is a systematic approach to giving for the benefit of people in need. The Koran insists that worship is not just about religious observance but also the way believers use their wealth and treat other people. The proper way of paying zakat is prescribed. People should calculate their wealth annually and set aside 2.5% to be distributed to people in need, though further charitable giving is encouraged.

Gift Aid in the UK has been a considerable support to our charitable sector and is worth a considerable amount to many of ACEVO's members. The UK has always had a generous system of support for giving, but the Government can and should do better. Which is why they launched a consultation some 2 years ago. But since then it has been mired in an interminable Treasury maze where it appears we will never emerge into the daylight. On Gift Aid we have spent many hours reviewing ways to improve the scheme , cut bureaucracy and ensure charities get a better deal. We know that many millions are lost to charity through the way the current scheme operates. So money that rightly should come to us stops in HMT. So the message is simple. The time for talk is now over. Give us our money guys!

ACEVO has been interested in the " opt out" system for declaring you are a taxpayer and also for higher rate taxpayers to contribute gift aid at the higher rate. An interesting idea has been pur to HMT that gift aid should be based on a " composite rate" ie a balance between basic and higher rates based on the statistical breakdown of hoe many people pay basic v higher rate.

But we do now need to see what the Government will do on gift aid. I have told Stephen Timms MP , the HMT Minister responsible , that we expect a response in the PBR announcement in November. Movement on gift aid will demonstrate that the Government want to show support and help to charities as they face higher demands on their services and uncertain finances.