Yesterday we had one of our ACEVO lunch events for Opposition Front Bench members to meet with CEOs from across the sector. It went brilliantly. Caroline spoke about her brief as the Local Government spokesman for the Conservatives. She shadows DCLG.
What was particularly impressive was she spoke about her experience as a hands on trustee of two charities based in her constituency. Both she helped to start. One tackles the problems of domestic violence and the other drug problems. So she spoke with passion about the problems of short term funding, the hassles of CRB checks and the power of partnership working.
It is interesting that of the most likely Tory MPs in the new Parliament 55 have backgrounds in the third sector. This is a radical change from the past. It bodes well for a good relationship. It was the same in 1997 when amongst the new intake of Blair MPs a large number had sector backgrounds and this helped ensure a strong engagement with the sector.
So having a Minister who has such hands on experience of our work has to be great news. She was keen to see the third sector taking advantage of the new Conservative localism; moving power from the centre, scrapping the regional bureaucracy and engaging with local authorities on a positive approach to the third sector.
We had a number of respondents to her: Dame Elizabeth Hoodless spoke about the challenges faced in volunteering, my Vice Chair, Allison Ogden-Newton, on social enterprise, Steve Wyler on community development and Jonathan Lewis on the Social Investment Business. There were strong contributions from a local London training group, the magnificent Paul Martin of the Gay and Lesbian Foundation, the YHA , Faith Action etc.
I have to say it was a lively, humorous and engaged event. Caroline clearly enjoyed it as she stayed an hour longer than she planned.

The photo shows Caroline in the ACEVO office with Steve Wyler, Jeremy Swain (one of the sector's great CEOs who runs Thames Reach) and the gorgeous Allison of Social Enterprise! 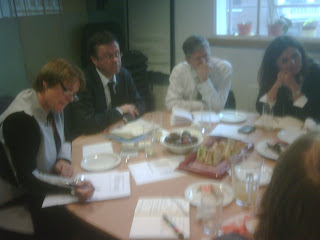 Our next such event is with one of my Tory favourites, Nick Herbert MP. Though not sure I'm keen on his promise to re-run the hunting vote... That will go down badly for one of my more prominent members!!!
Then off to a Board meeting for the Adventure Capital Fund. One of our Trustees, currently a very senior civil servant is off to Washington as a senior fellow with one of the top US Think Tanks, the Centre for American Progress. I promise to pop in next time I'm there. And Dame Denise Platt leads an interesting debate on Local Government and opportunities for the sector. She referred to the Barnet Council decision to move to totally outsourced services with only a very small core staff at the centre.
It brought us back to the points being made by Caroline earlier. ACEVO is appointing a new Policy researcher to undertake work in developing sector strategy in Local Government. As we face a period of cuts in councils we need to ramp up our engagement here. And we shall.