The highlight of the tour today; addressing the Social Enterprise Summit held at the Jesuit University ; The Ateneo de Manila University. This University is one of the foremost learning institutions in the country and is a forerunner in teaching a social enterprise course.

I was talking about " scaling up " because the key issue here is how to develop third sector- social entrepreneurship and if it is to make a real dent in rural and urban poverty social enterprise it needs to go to scale.

An interesting reflection on our own sector when there is debate about large v small. Here though they do not have the luxury of that debate; when half of Manila's citizens live in slums and some 18m people in rural villages have no electricity, then scale is urgent.

I argued that, in general terms , 5 factors are needed for scale.

# First, there clearly has to be opportunity to scale up. In the UK this is provided by public service reform and by a policy commitment to " big society".

# Access to capital is crucial for growth. This applies here as much as in the UK. And I'm glad to say there is not the same debate we have about grants v loans. Here there is a very clear understanding that loans are a crucial way of growing organisations; whether micro finance or social venture capitalists. They see the value of loans as empowering sustainable development. I talked of the Big Society Bank idea and the work of the Social Investment Business as " engaged investors".

# Government support; I argued crucial to sector development in the UK has been work with Government , advocacy and campaigning to get Governments on side. That is more tricky here; especially with a Government that has a nasty habit of not paying bills or honouring commitments and when the state officials are often corrupt. Someone told me that anyone building roads for local government will expect to put down over 50% in bribes up front. So some way to go before the Philippines Government set up an Office of the Third Sector!

# Collaboration and partnership. I argued that one way to achieve scale is through collaborative approaches across the sector between organisations and between the public , private and third sectors. I spoke about the examples of 3sc and Serco and Turning Point and Catch 22. There are already such arrangements here and this must grow, just as it must in the UK. I argued that one way to secure scale without undermining the value of localism was to develop consortia that harness scale but involve a framework of local and small scale porducers.

# Leadership; the bottom line is the quality of the people at the top of the organisation. You loan to individuals , not organisations. I also warned against getting hung up on process and models. I said the UK often got too hung up on trying to define what a social enterprise is and who qualifiers and who does not. I explained that we don't have a legal form for social enterprise and many are registered as charities. It's a verb not a noun as Liam Black was always saying.

It's the attitude that matters. Whatever form of body you are you need to have the attitude of social entrepreneurs. You need strong Leaders and invest in their training and development.

I also spoke at a dinner later in the day for members of the faculties at the university and students, especially those taking a module on social enterprise. The Q+A was lively and informative. I was even asked was the " Big Society" all rhetoric and a cover for cuts. A good question ( though I was uncharacteristically diplomatic in response! ). 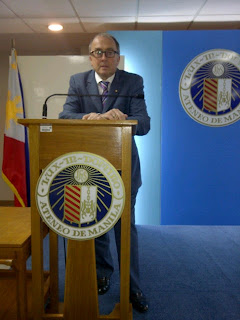 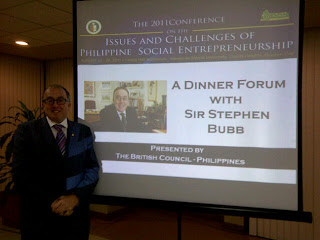 But the highlight for me has been meeting and visiting social enterprises. I had an amazing brunch with the founder trustees of GKonomics, 5 dynamic and elegant ladies ( Pinky Poe, Cecile Manheimer, Divine Duran and Marivic Pineda ) who are clearly a force to be reckoned with.

Their vision is to build a new generation of producers; building enterprises which produce world class products they then bring to market.

They set up their social enterprise 2 years ago to bring to market the products produced in many isolated villages or in poor urban areas . Products that make use of natural products or recycling. So , for example they arrange for villagers to make really fashionable and snazy bags made from recycled fruit juice cartons or magazines. They are selling these at the high end of the market and have already made inroads overseas.

Earlier today I went to visit the" Echo Store". This is another social enterprise set up by a number of formidable women like Chat Juan ( interesting how the social enterprise sector here is dominated by women! ). Chat ran her own successful coffee shop company until she sold it and went into developing the Echo store concept. The store sells a range of products from their own line of organic cosmetics, coffee, jewellery made from both natural and recycled products, dog and cat products ( obviously I bought a rather nice organic dog shampoo for you know who ! ) Wastepaper baskets etc! They have grand plans for expansion and already have a farm and restaurant. They source their products from many rural or marginalised communities along both fair trade and organic principles.

You can see the range of bags here in the display in the Echo store.. 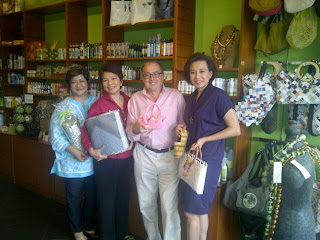 My last visit of the trip was to see jim Ayala of Hybrid Social Solutions. They are dedicated to supporting rural communities that have no access to electricity or usable water by developing solar energy and water purification plants. He showed me their solar lamp which will give enough light to light a room. This proves both inexpensive but also cuts out the use of dangerous lighting methods like kerosene lamps. You can even recharge your mobile off it!

The British Council have done me proud by organising all the visits in such an efficient way. The British Council is a fine organisation. It is often forgotten it is part of the third sector and indeed Vernon Ellis their current Chair was knighted at the same time as me! They have been doing a lot of work in Asia promoting the idea of social enterprise and bringing UK experience to help in the development of social entrepreneurs across the region.

I've now finished the official part of my visit and am off to a small resort on a beautiful island for some R+R on a palm fringed beach. All work and no play make Bubb a dull boy. Which no one would ever dream of suggesting I'm sure!