Social entrepreneurs; it's about attitude

If you want to see what a city is like when there is no good public transport come to Manila! I have spent more time than I care to mention sitting in cars that are stationery in jams for as much as they are actually driving!

Stuart Etherington, who told me he has been to the Philippines twice said, " avoid Manila" which is somewhat difficult when said city is the venue for the Conference!

But it is fascinating in its own way. A massive urban sprawl of over 11 million people. Tower blocks and slums. Glaring evidence of inequality. In fact Manila was a fine and attractive Asian city but , along with Warsaw and Hiroshima , it was the city most damaged in the War when American troops fought street by street to clear out the Japanese. Huge civilian casualties and the historic Spanish old city obliterated.

But first stop on arrival here was the Embassy. A meeting with the Ambassador ; though as it turns out the Deputy, Trevor Lewis, as he has been called away to something more important. But it turns out I'm not the only famous Brit arriving in Manila: an illustrious visitor is here but I am not saying who.

From the Embassy a geographically short journey though one which takes an hour to meet with Go Negosyo and to speak to a gathering of some 100 social entrepreneurs. An exhilarating meeting where I learn as much about the state of the sector here as they learn from me: but then it's crucial that even slightly olding Leaders like myself continue to learn and be inspired by others.

Go Negosyo is an advocacy body promoting social entrepreneurs by arguing for change in " mindset and attitude". They say,

" We believe that Filipinos can address poverty in the county by engaging in entrepreneurship and developing an optimistic, passionate, creative and innovative , resourceful diligent and persevering character . We encourage everyone to take charge and make the most of their resources and abilities"!!

They produce a range of great books and provide mentoring support and advice. I met Mary Canon-Abaquin who has produced a best seller book for parents " 8 simple secrets to raising entrepreneurs" , on how to develop these skills in kids. They even have social enterprise on The curriculum, something the Social Enterprise Coalition has yet to achieve in the UK!

I speak about experience in the UK but emphasise the importance of leadership development. I strike a cord when I tell them ACEVO believes the hallmarks of leaders in the third sector are professionalism and passion. Professionalism without passion is sterile, whilst passion on its own just gets you well meaning amateurs. I say its the major defining difference between us and commerce.

I have an appalling cough and go through 6 glasses of water during the presentation. They were worried it was Manilla polution but I assure them it's UK grown!

A great and lively Q+A when I am asked about my Blog and I reveal there is a spoof one. So Sir Robin , you must now be getting hits from the Philippines!

I'm asked about the need for laws to promote social enterprise but I explain there is no legal form for social enterprise in the UK; many are registered charities. I argue its attitude that matters, not process. It's the message that Go Negosyo promotes. They are right.

An evening dinner hosted by the Deputy Ambassador and the British Council provides a more intimate occasion for an exchange of views. Much interest in the mechanics of knighthood and swords etc. 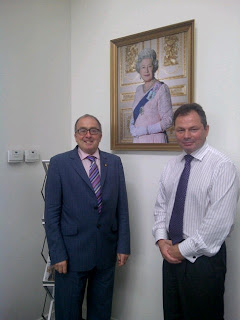 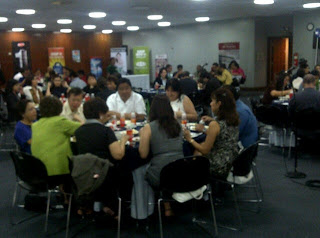